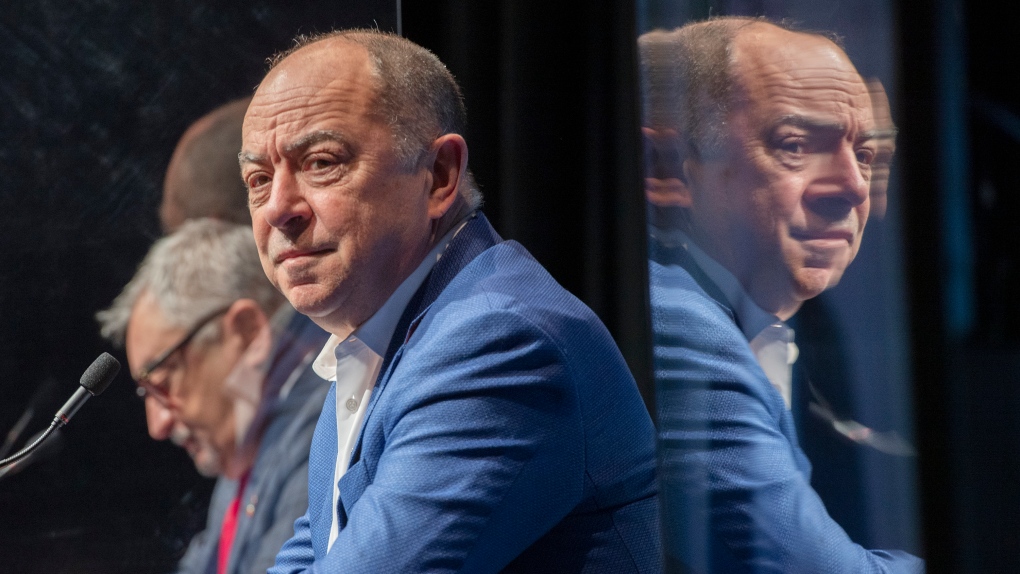 Quebec Health Minister Christian Dube, right, and Quebec Public Health Director Horacio Arruda speak during a news conference in Montreal, Tuesday, December 28, 2021, where they gave an update on the ongoing COVID-19 pandemic in the province. THE CANADIAN PRESS/Graham Hughes

Health Minister Christian Dubé confirmed on Friday that he will be a candidate for the Coalition Avenir Québec (CAQ) in the provincial elections next fall.

Dubé, who is 65, announced the news during an interview with the Montreal radio station 98.5.

Shortly after, Premier François Legault reacted with happiness on social networks, arguing that Quebec was lucky to have a manager of Dubé's calibre.

During the interview, the health minister said he thought long and hard before making the decision to pursue his political career, because he's aware of the magnitude of the task that awaits him -- to carry out the health reform he recently proposed to Quebecers.

He also said he consulted his family before deciding on his political future.

He served as first vice-president of the Caisse de dépôt et placement du Québec (CDPQ) from 2014 to 2018 before being elected deputy of the CAQ in La Prairie, in Montérégie, in 2018.

This report by The Canadian Press was first published in French on May 20, 2022.

Russia strikes Kyiv as troops consolidate gains in the east

The latest on the G7 summit: U.S. Secretary of State Antony Blinken says Western sanctions on Russia over its invasion of Ukraine are having 'a profound impact.'

The higher parts of Angelique Beauchemin's land, she said, are sinking an inch or two a year as they slope ever more steeply toward the river. While she's not a scientist, she says her biggest fear is that one day there will be a landslide and the white house at the top of the hill where she's lived for decades will tumble down.

The federal public safety minister says he is 'deeply committed' to enhancing oversight of the RCMP by strengthening the role of the national police force's management advisory board.