Since the start of the pandemic, Quebec has issued millions of dollars in tickets for public health violations, but only a fraction of them have actually been paid so far, according to provincial data.

From April 1, 2020 to Dec. 31, 2021, authorities have handed out a total of 30,488 tickets to citizens and businesses for not following measures under the Public Health Act.

Out of the $45,732,899 in tickets, Quebec’s Ministry of Justice told CTV News that $5.7 million has been collected so far as the vast majority of people who have been fined either ignored them or are challenging them in court.

Dylan Jones, a Montreal-based lawyer who has represented about a dozen people who have received fines for breaching the curfew and not respecting physical distancing, said he believes the high cost of the individual fines and growing opposition to health measures among part of the population has motivated people to fight the fines.

“That group is going to be probably much, much more likely to receive these types of tickets than the average citizen and … because they're so motivated to fight [they’re] much, much more likely to contest to, not pay, to ignore, to leave it because they don't believe in it. They think it's wrong. They think it's in violation of their rights. And so they're going to take it down the line,” he said in an interview Wednesday.

People who are issued a ticket have 30 days to enter a plea, but, as the data shows, a significant portion of people who were ticketed appear to have ignored them — a decision the justice ministry said could lead to further punishments.

About 41 per cent of people who didn't enter a plea within the legal timeframe will "likely" be sentenced by a judge to pay by default in their absence, according to Isabelle Boily, a spokesperson for the justice ministry. In those cases, the court will decide whether or not the defendant is guilty based on the evidence presented by the prosecutor.

The ministry spokesperson said 38 per cent of people who received a ticket have pleaded not guilty and their cases are still before the court.

While Jones said he suspects the province might be successful in recouping more of the $45 million in fines so far, he said it’s important to be mindful that “the wheels of justice grind slowly and I think that definitely applies” to these tickets.

"Even though it's been two years, we're pretty early on the court cycle of these tickets, but they obviously won't get all of the amounts of those tickets," he added.

Approximately 15 per cent of people pleaded guilty or paid the full fine without entering a plea within the required response time.

About six per cent of the fines issued are still within the legal 30-day limit for a plea to be entered.

TERREBONNE TAKES #2 SPOT FOR MOST TICKETS

The ministry data broke down the numbers by judicial districts across Quebec. It was no surprise that the Montreal district saw the highest number of fines issued within the 21-month period. Just under 11,200 tickets were issued to people since the start of the pandemic.

Remarkably, the judicial district of Terrebonne, which encompasses 58 municipalities, saw the second highest number of tickets issued to citizens and businesses since the start of the pandemic. With a census population of 601,990 people, the records show 2,750 fines were handed out.

In comparison, in the judicial district of Quebec City, home to the province’s second most populated city, police handed out 2,480 tickets. That’s less than Terrebonne, even though the census population in the Quebec City region is larger with 892,678 people.

Terrebonnne also has nearly three times the number of tickets issued than the Longueuil district — 989 tickets — even though it is similar in population size with 614,426 people. 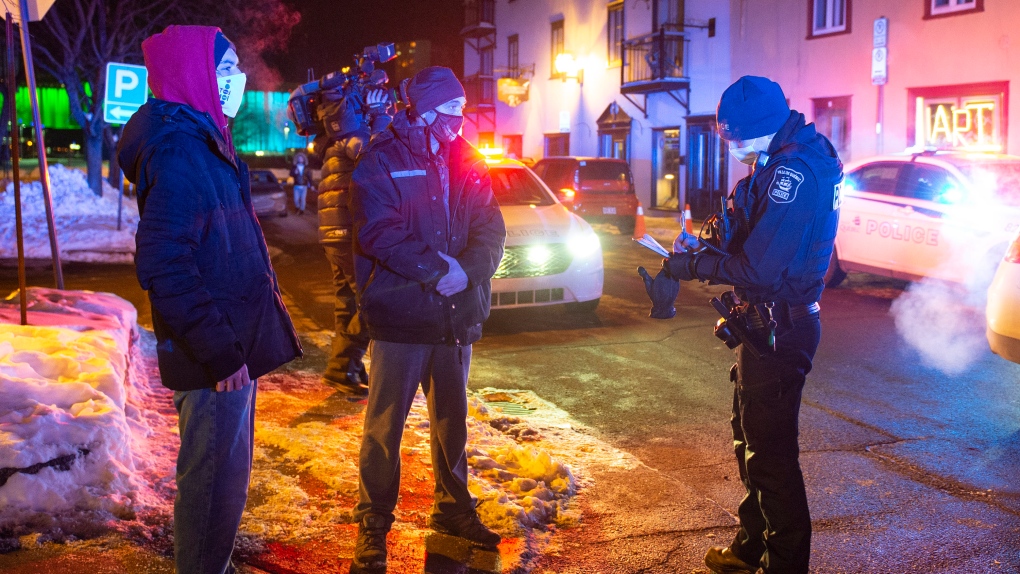 A police officer, right, notes the identity of two men after 8 p.m. as a curfew begins in the province of Quebec to counter the spread of COVID-19 on Saturday, January 9, 2021 in Quebec City. A handful of demonstrators walked downtown to protest the curfew. THE CANADIAN PRESS/Jacques Boissinot

Judicial districts in Laval and Gatineau were also among the regions that saw more than 1,000 fines in the first two years of the pandemic, with 1,455 tickets and 1,263 tickets issued, respectively.

Quebec was the only jurisdiction in North America to impose a curfew during the pandemic, the first of which lasted nearly five months, from Jan. 9 to May 28, 2021. It was a measure that kept police officers in Quebec busy.

In the month before the first curfew was introduced, Quebec Premier François Legault called on police to “crank up the number” of tickets to people caught violating the public health measures in place. At the time, he said he wanted to “send a clear message” to what he described as a small minority of Quebecers who were putting people at risk as daily cases of COVID-19 remained high.

If citizens and businesses refuse to pay the fine within the required time period and are later found guilty, they could face financial penalties and even jail time

Cases of ignored tickets are handed over to the province’s Bureau des infractions et amende (BIA) to enforce the judgment if there’s a conviction.

“Following an assessment of the defendant's financial situation, the fine collector may agree to a payment agreement,” the Ministry of Justice spokesperson said.

If those attempts are unsuccessful, then the government can seize property or income to recover the money.

The collector may also issue a jail term “as a last resort,” although Jones said this sanction is extremely rare.