Quebec evictions to restart this month; tenants' group warns of 'wave' to come 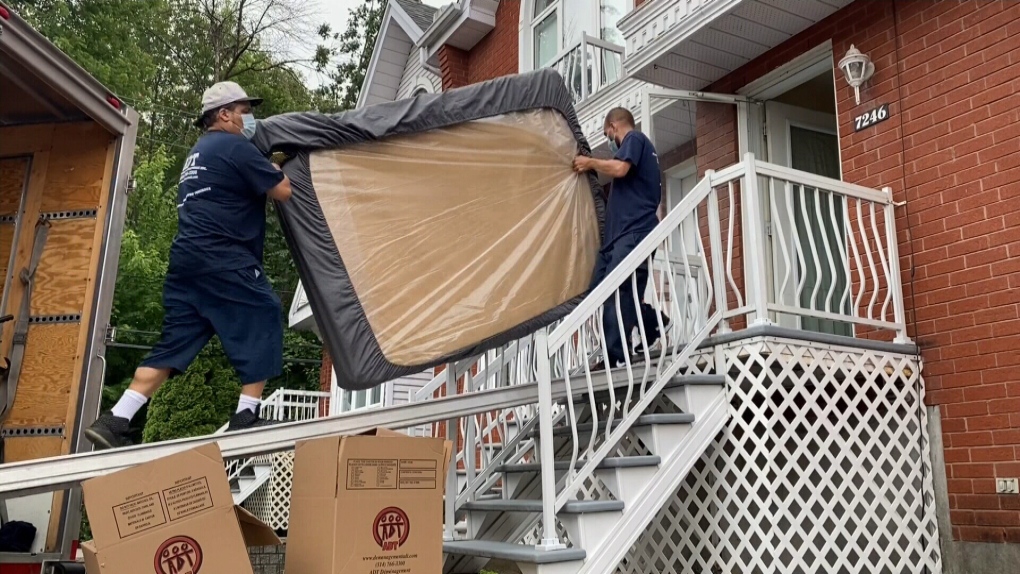 MONTREAL -- Evictions are restarting in Quebec, with a tenants’ rights group warning “waves” of people will lose their homes.

As of now—July 7—landlords can begin acting on evictions approved before March 1, said Quebec’s housing minister in a news release.

All eviction rulings from after March 1 will take effect on July 20, and as Quebec’s housing tribunal has now been reopened for hearings, brand-new evictions are also an option.

A governmental decree on March 17 had suspended evictions, and the Regie du Logement housing tribunal also paused most hearings from then until June, when they began to resume.

A May study by Quebec’s landlords’ association found that 15 per cent of Montreal tenants were at least a week behind on rent that month, after even higher numbers in April.

Andrée Laforest, Quebec’s housing minister, reminded people in the release that the province had offered interest-free loans to tenants who had lost income due to COVID-19 in order to help them pay their rent.

“It is now time for building owners to take the necessary steps to have their judgments enforced, if necessary,” she was quoted as saying.

A tenants’ rights group reacted with alarm to this news on Tuesday, calling on Laforest to extend the moratorium by at least six months.

Thousands of Quebecers will lose their homes in the next few months, predicted Maxime Roy-Allard, the spokesperson for RCLALQ, an association of Quebec tenants’ groups.

“So many tenants have lost their jobs and are not able to pay their rent on time,” he said.

The RCLALQ fears “waves of eviction” leading to a new, large group of homeless families and overcrowded families, “the last thing we need” amid the pandemic, they wrote in a release.

Roy-Allard said in an interview that, aside from extending the moratorium, the group thinks it’s vital for the ministry to grant Régie judges more discretion in their rulings.

In Quebec, if tenants are three weeks late on rent their landlords can start eviction proceedings. It usually takes about two months from that point to actually be evicted, though at the moment the wait time is likely longer.

Quebec tenants can avoid eviction if they manage to pay their debt to the landlord by the time the judge releases his or her ruling in their case, Roy-Allard said.

But that’s the only concession made: judges are not allowed to consider any other factors, or to grant a little more time to someone who, for example, has repaid 95 per cent of the rent owing.

“We've seen eviction cases over a debt of two dollars,” he said. “I know it sounds ridiculous, but they don’t look at why [the person stopped paying] and whether the tenant will be able to pay it back over the next few weeks.”

“Even in Ontario it's not harsh like that,” he said.

The housing ministry couldn’t be reached immediately for comment.

In Montreal recently, Roy-Allard's group has “seen it all,” he said.

“Many people were not able to pay at all and will probably be evicted over the next few weeks. Some people got late just a little bit, and the landlord said ‘Okay, it's fine for this time,’ but it really depends on the landlord.”

Many of the big housing corporations were inflexible, while individual landlords tended to be more willing to work it out, he said.

RCLALQ also wanted Régie judges to be able to take low vacancy rates into account and to give evicted families extra time to find a new place.

A group of jurists also called on the province to grant Regie judges greater powers of discretion, allowing them to be flexible in their rulings.

“The [Regie] judges should be able to take into account the health context and availability of rental housing, and therefore to be able to suspend the effects of a judgment for the time that they consider reasonable in the circumstances,” said Rafik Bentabbel, a lawyer and member of the Association of Progressive Jurists.

Roy-Allard said his group has requested several meetings with the ministry and sent letters with these requests, but has never heard back.

The Régie could not be reached immediately to provide statistics on eviction cases filed since March or give an update on current wait times.

In a normal year, the rental board hears around 40,000 cases of non-payment, Roy-Allard said, and he expects it to be higher than usual this year.