Quebec details plan to capture, fence in isolated caribou herds to protect them 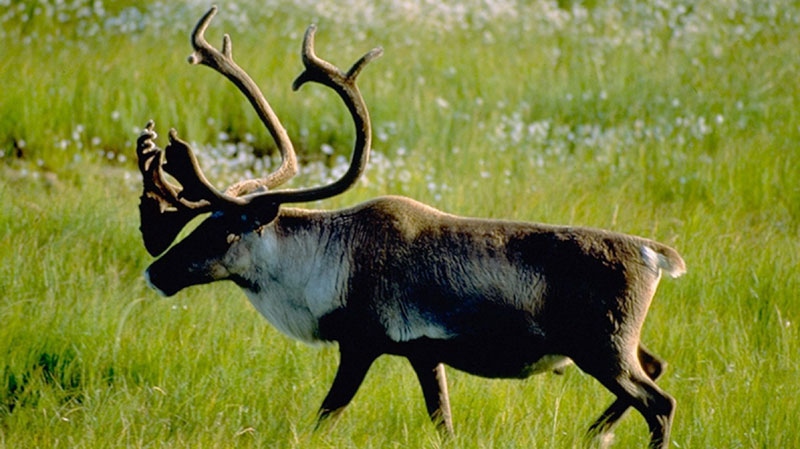 The Quebec government will deploy helicopters, net guns, specially built traps and tranquillizer darts to capture and fence in animals from two isolated wild caribou herds to save them from dying out, the Wildlife Department said Wednesday.

Members of the herds in Gaspesie, Que., and Charlevoix, Que., will be captured and moved to newly built enclosures before the end of winter, representatives from the Wildlife Department told reporters.

The entire Charlevoix herd, estimated at fewer than 20 animals, will remain in the enclosures indefinitely, while in Gaspesie, the plan is to capture just the pregnant females and release them once their fawns are a few months old.

The province is also building a bigger pen for the herd in Val d'Or, Que., which was enclosed in 2020 and counts just seven animals.

In a briefing Wednesday morning, a biologist with the Wildlife Department released photos and plans of the facilities at each site. The images show high, electrified fences covered with black landscaping fabric, designed to deter predators and curious humans.

In general, the facilities each include two main living spaces as well as smaller enclosures to isolate sick animals or those who are giving birth. They also include spots where the animals will be fed and can be captured if needed.

Because the terrain won't provide enough grazing material, the animals' feed will be supplemented with lichen, grain and some hay.

Melissa Chatelain, a government biologist, described the project as "unique and large-scale," promising that animal well-being was "at the heart" of each of the decisions made.

The Quebec government has argued that enclosing caribou helps protect them from predation and ensure they have access to enough food, water and veterinary care.

But environmentalists have criticized the province for its failure to protect the caribou's old-growth forest habitat and for delaying the release of its long-awaited action plan to rebuild the species.

Carl Patenaude-Levasseur, a manager with the Wildlife Department, told reporters that fencing in the animals is considered a temporary measure to help them survive, but he could not say when they might be released.

He said answers would likely come when the government releases its caribou action plan, which is expected to be published sometime this year and come into effect in 2023.

Pier-Olivier Boudreault, a biologist and director of conservation with nature group SNAP Quebec, described the government's plan as a "smokescreen" that gives the public the impression it's serious about saving caribou when its lack of meaningful action proves the opposite.

He said the caribou numbers have dwindled because of decades of government inaction.

"We're a little disillusioned that we've gotten to this point of putting caribou in enclosures," he said in an interview Wednesday. "These are animals that travel thousands of square kilometres in the forest who are confined to a fifth of a kilometre in an enclosure."

Boudreault suggested that the millions of dollars being spent to fence in the caribou could be better used to preserve remaining old-growth forests and to close the logging and hunting roads that grant predators easy access to their prey.

Caroline Hins, a biologist with the Wildlife Department who was present at the technical briefing, admitted that it becomes harder to successfully release the animals the longer they remain in captivity.

"The longer we wait, the more the caribou will lose their instinct to evade predators and feed themselves," she told reporters.

The animals in Gaspe will be captured in the "traditional" way by helicopter and net gun, Chatelain said. From there, the pregnant females will be taken to one of two 15-hectare "maternity pens."

In Charlevoix, where the animals are known to be more fearful, Chatelain said the government is trying a strategy that involves building a temporary fencing system and herding the animals into a smaller space where they can be tranquilized and taken to their new enclosure.

Chatelain admitted that the government can offer no guarantee they'll be successful in capturing the caribou.

Patenaude-Levasseur said the cost of the fencing for the new enclosures in Gaspe and Charlevoix is about $1.1 million each, plus another $300,000 to $400,000 for other infrastructure such as access roads, feeders, wells, and a residence for a guardian to watch the animals.

That doesn't include ongoing yearly costs such as the guardian's salary, feed for the animals and snow removal.

The five jurors at the inquest into the death of Chantel Moore have ruled that the Indigenous woman's death was a homicide.

A 911 dispatcher has been placed on leave and may lose her job after allegedly hanging up on an supermarket employee hiding during this weekend's shooting rampage in Buffalo, New York.

Jason Kenney has quit as UCP leader. What happens to the party and government now?

With Jason Kenney having stepped down as leader of Alberta's United Conservative Party, who is now leader of the province?

The Conservative Party is doubling down on its call for the federal government to do away with travel restrictions and revert back to 'pre-pandemic rules' in light of recent airport delays.