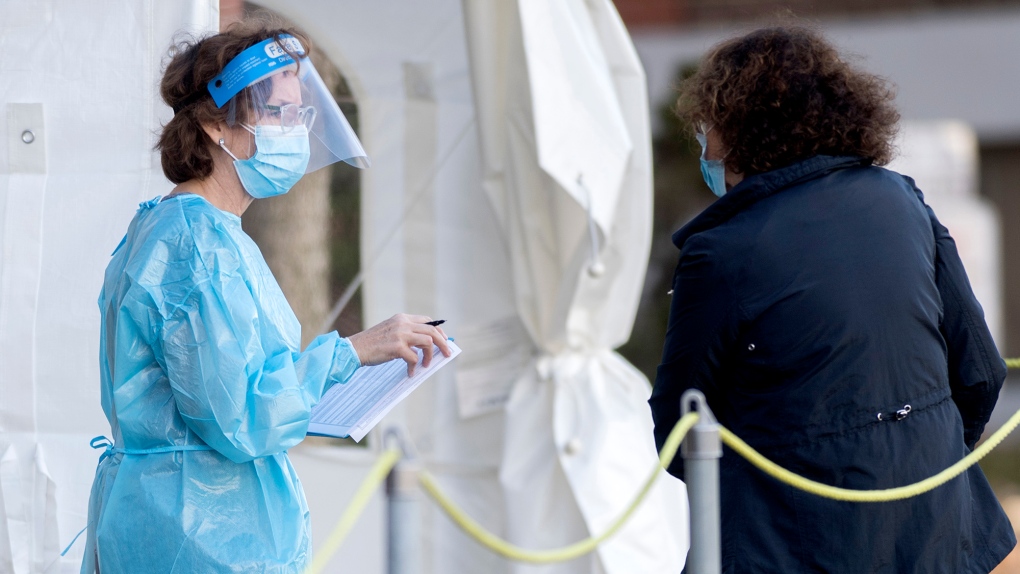 A health-care worker talks to a woman at a COVID-19 testing clinic in Montreal, Sunday, November 8, 2020, a day after Canada broke a new record for new COVID-19 cases across the country. (THE CANADIAN PRESS / Graham Hughes)

After what appears to be a blip earlier this week when COVID-19 hospitalizations rose, Quebec's numbers dropped again Thursday, with the province reporting 46 fewer people in hospital overall.

That includes 191 people newly admitted and 237 discharged. There was a seven-person drop in ICU cases, with 83 people currenty getting intensive care.

Meanwhile, another 23 people have died from the virus, bringing Quebec very close to the sober mark of 15,000 deaths -- the province currently stands at 14,951 deaths.

The hospital system is still under strain, as well, with a total of 2,326 COVID-19 patients and 9,377 health-care workers absent for various reasons related to the virus.

Provincial public health officials said last week they needed to crunch the epidemiological numbers after Easter weekend, when many people gathered, before making a bigger prediction about the course of the sixth wave from here.

On Thursday, Quebec public health chief Dr. Luc Boileau is scheduled to give an update in a 2 p.m. press conference.

The province is still giving tens of thousands of shots daily, with 33,413 vaccine doses reported in the last 24 hours.

Many of them are presumably fourth doses for the elderly, who have been invited to get these second boosters, since those doses aren't being publicly reported yet and the majority of the doses are not showing up in Quebec's daily breakdown.

Mere months after a judge handed down a verdict in the Johnny Depp-Amber Heard defamation trial, the courtroom drama has been adapted into a film by streaming service Tubi called 'Hot Take: The Depp/Heard Trial.'