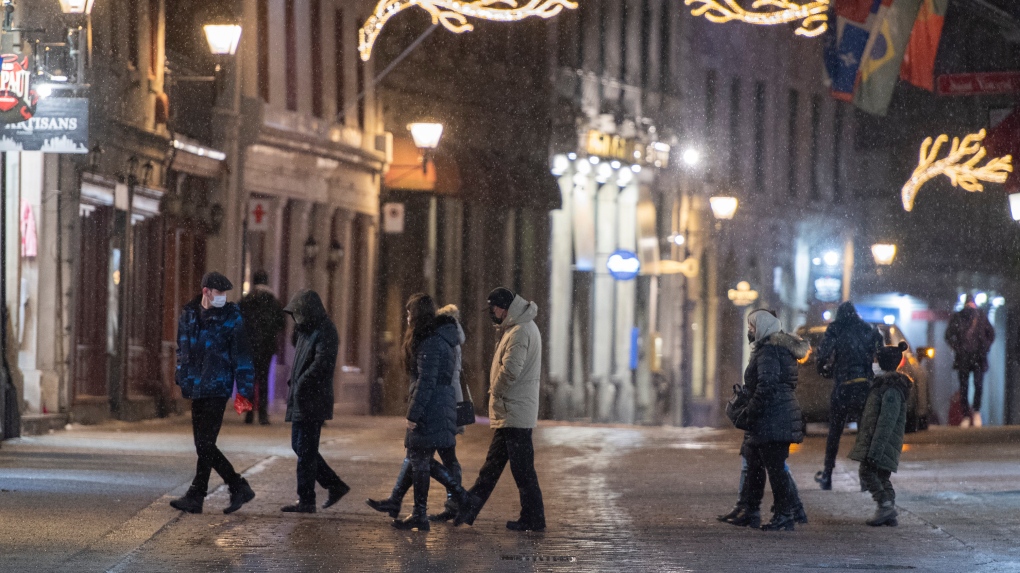 People walk along a street in Old Montreal following a news conference Thursday, December 30, 2021, by Quebec Premier Francois Legault where he announced new measures to help curb the spread of COVID-19. THE CANADIAN PRESS/Graham Hughes

Quebec's COVID-19 numbers continue to decline, though the province is still reporting dozens of new deaths per day from the virus.

On Thursday, the province reported 35 deaths. Hospitalizations continue to drop, with 36 fewer people overall in hospital compared to Wednesday, and two fewer in intensive care.

That includes193 people newly admitted and 229 who have newly left hospital.

There are currently 2,312 hospitalizations in total, with a total of 173 in intensive care.

The daily case numbers have not been accurate for about six weeks because of a lack of testing capacity, but on Wednesday, the true extent of Quebec's Omicron wave became more clear with new estimates from Public Health Director Dr. Luc Boileau.

He said that a quarter of all Quebecers, or about two million people, contracted COVID-19 just in the last two months or so, since early December.

Around half of the population has now caught COVID-19 over the course of the pandemic.

The official count is much, much lower. On Thursday, the province reported 2,894 new cases and said the overall total is now 891,951, less than a quarter of what Boileau estimated.

Now that the province has begun to allow people to officially self-report their at-home rapid tests, that is adding to the numbers, with 720 new positive cases declared this way in the last 24 hours, and almost 75,000 at-home tests declared so far in total.

PACE OF VACCINATIONS HAS SLOWED

The province added just 32,756 doses of COVID-19 vaccine in the last 24 hours, suggesting the demand for vaccines is slowing. The daily count was about four times higher a few weeks ago.

Nearly half the population, 48 per cent, now has a booster shot, includng 82 per cent of those over 60.

The level of children's vaccination is slowly increasing, with 64 per cent of kids aged five to 11 now having a first dose.