“On the eve of July 1, there were 750 tenant households that had not found housing," in Quebec, according to Véronique Laflamme, spokesperson for The Front d'action populaire en réaménagement urbain (FRAPRU).

That estimate is based on assistance applications received by municipal housing offices across the province. It could change based on how many families are able to find housing in a pinch.

On that day, the number is much higher than last year, when 420 households were at risk of not having anywhere to move into, Laflamme said.

On Friday, there were 107 households in Montreal "accompanied by teams and who still have not found a permanent solution," said a city spokesperson in an email to The Canadian Press.

Among them, "some have been able to negotiate a short-term lease extension, while others will be able to be housed by relatives.” In all cases, the city says it has been able to "manage and temporarily house" those in need.

According to Laflamme, "these numbers are the tip of the iceberg of the housing crisis," while an unknown number of families are living in "appalling (housing) situations," or in housing that is too small or too expensive for their needs.

FRAPRU will present an update on the situation on Saturday morning at a press conference. 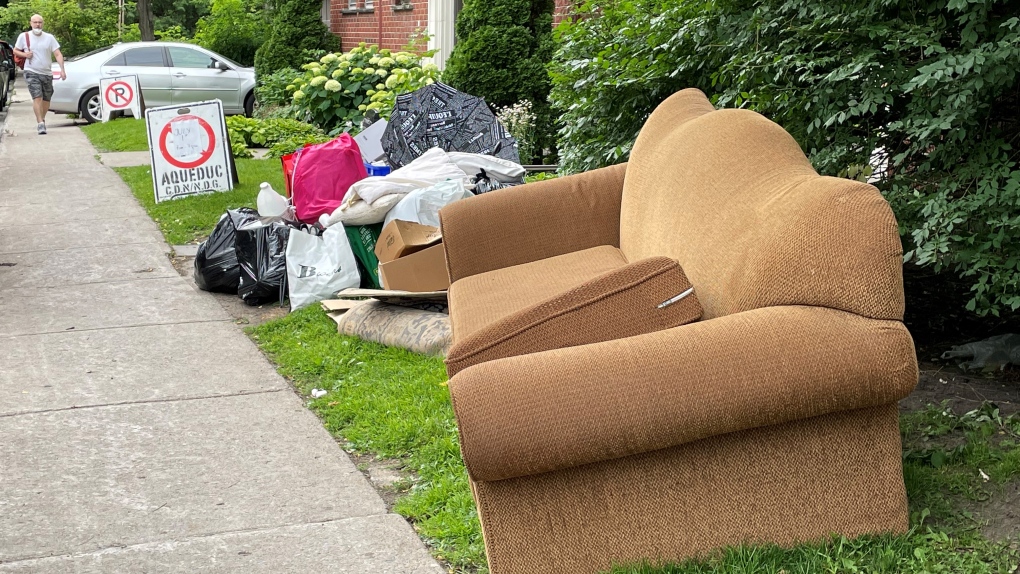 Moving day in Montreal means piles of furniture and other discarded items along the streets. (Touria Izri/CTV News)

A CONSTANT SOURCE OF STRESS

A recent Léger poll found that housing remains a constant source of stress for many in the province.

The survey found 47 per cent of renters, 55 per cent of single-parent families, 46 per cent of households with an income of less than $40,000 per year, 44 per cent of immigrant families, and 34 per cent of Greater Montreal residents are feeling a great deal of stress when it comes to their housing situation.

Households in need of housing support are encouraged to call their municipal housing office or the Société d'habitation du Québec for immediate assistance.

As part of its “Operation July 1,” the government also allocated $2 million for housing search assistance, temporary accommodation and storage of goods.

“There is absolutely no reason for people to be sleeping on the street tonight if they call on the emergency teams of our housing authorities," said Housing Minister Andrée Laforest in an emailed statement.

However, those measures do not get to the root of the problem, according to FRAPRU.

‘We feel that the government is not acting with structural measures," said Laflamme, who is calling for better legislative protections against real estate speculation, renovations and fraudulent evictions.

They point to a Canada Mortgage and Housing Corporation (CMHC) report that found that only 18 out of every thousand units with three or more bedrooms are available for rent in Quebec.

"Because they are often considered less profitable, large units are neglected by private developers, and those that are built are unaffordable," FRAPRU spokesperson Véronique Laflamme said.

-- This report by The Canadian Press was first published in French with files from CTV's Daniel J. Rowe on July 1, 2022.

Anne Heche on life support, survival of crash 'not expected'

Anne Heche is on life support after suffering a brain injury in a fiery crash a week ago and her survival isn't expected, according to a statement from a representative.

Former U.S. President Donald Trump has called for the 'immediate' release of the federal warrant the FBI used to search his Florida estate, hours after the Justice Department had asked a court to unseal the warrant, with Attorney General Merrick Garland citing the 'substantial public interest in this matter.'