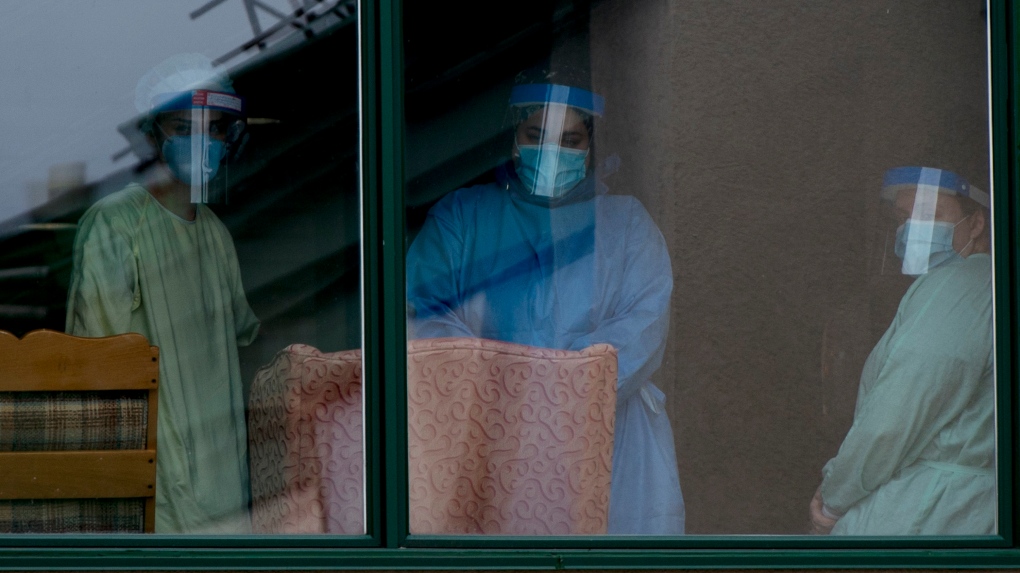 Healthcare workers look out from Maison Herron, a long term care home in the Montreal suburb of Dorval, Que., on Saturday, April 11, 2020, as COVID-19 cases rise in Canada and around the world. (THE CANADIAN PRESS/Graham Hughes)

MOTREAL -- Quebec's coroner Pascale Descary has ordered a large-scale public inquiry into the COVID-19 deaths of seniors in the province's long-term care facilities.

The process will be fully public and will allow Quebecers to follow the post mortem into this social issue, the coroner's office said in a statement Wednesday.

Nearly three-quarters of those who died from the virus in Quebec were over age 80 and 92 per cent were over 70 years old.

A coroner and lawyer Géhane Kamel have been appointed to preside over the inquiry. Kamel has already been tasked with investigating the deaths at Herron Residence in Dorval, which will form the basis of the investigation.

A coroner with medical training, Dr. Jacques Ramsay, will be appointed to assist Kamel due to the complexity of the subject and the large number of deaths, the coroner's office said.

"It is important to remember that coroners intervene in cases of violent, obscure or deaths that could be linked to negligence. Deaths outside these (parameters), including those that result solely from a coronavirus infection, are not investigated by the coroners," the coroner's office said in its statement.

Kamel and her team will look at deaths in several types of residences and in several regions in order to paint a representative portrait of the situation at the provincial level.

To be analyzed as part of the investigation, the deaths must meet the following criteria:

Kamel will be tasked with making recommendations into the matter "to avoid further deaths and protect human life," the coroner's office stated, adding that details of this investigation and the date of the first hearings will be released at a later time.

Hand hygiene, no face masks: SickKids experts on how schools can safely reopen in the fall

B.C. premier optimistic about moving to Phase 3 'sometime next week'

Canada-U.S. border to remain closed to non-essential travel for another month