Quebec contact-tracing system under pressure; in Montreal, they can't reach everyone 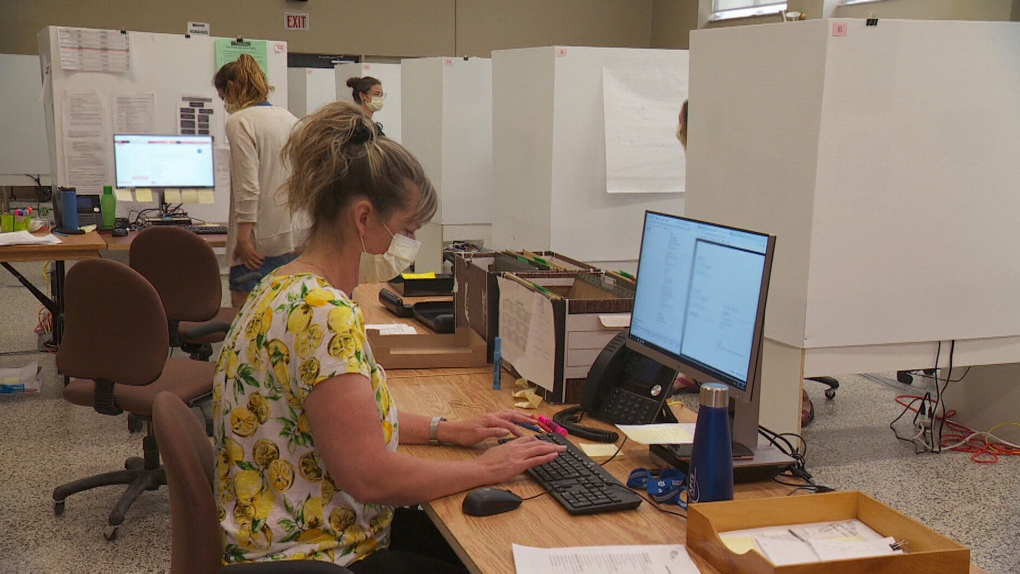 MONTREAL -- The rise in the number of COVID-19 infections since the holidays also means an exponential increase in those who have been in contact with an infected person, and who therefore must also be traced by public health -- which has made for a lot of pressure on the system.

Not everybody, in fact, is being traced, as it's simply no longer possible.

The number of new confirmed cases of COVID-19 in Quebec has passed the 2,000 case mark for 10 days in that time span: for example, 2,588 new infections were reported on January 7, and the day of January 8 marked a grim record with 3,127 cases.

Across the province, public health teams are in charge of contact tracing: they must find and notify anyone who has been in contact with infected people.

If these workers are lucky, each new case will only have been in touch with -- and risked infecting -- one person. But this is rarely the case. Each new infected person may have been near dozens more.

So the work multiplies for these workers.

"The task is significant and constantly increasing," said Dr. Catherine Habel, the doctor in charge of infectious disease emergency response at the Montreal Regional Public Health Directorate, on Thursday.

"We put on ourselves, and we on put them, a certain pressure to do all the work," she added, stressing the dedication and "sense of duty'' of these employees. She said they must often be reminded to take days off.

Montreal's regional directorate has assigned 1,000 employees to contract tracing, and it's adding 20 to 30 more each week.

But Montreal Public Health is not able to trace all the contacts of infected people.

"Given the current epidemiological situation -- we are in a phase of community transmission and the number of cases is too large -- it is impossible to trace all the contacts of infected people," said Montreal Public Health in an email.

Its employees still speak to anyone who lives with an infected person when they are present at the time of the call.

Public Health also contacts the employer and the school administration if the infected person works outside and has children.

For other contacts -- which are, on average, three per investigation in Montreal -- she helps the person diagnosed with COVID-19 compile a list.

She then sends those people a "daily" email to follow up on potential symptoms and calls symptomatic contacts back on the phone. If the symptoms are severe, "we tell them where and how to go for treatment."

The task is gigantic. The chains of transmission are too numerous to be able to trace them all, public health says.

"We would like to be able to call all contacts, offer them personalized follow-up and answer their questions," said Habel.

"However, we must adjust our interventions to the large volume of cases that we currently have and maintain activities that have a greater impact on the transmission of COVID-19 in the region."

This is why public health officials have said that in the current context of high community transmission, tracing alone is not effective in slowing the progression of COVID-19. It takes all the other techniques as well, such as isolation, containment and curfew, among others.

In Laval, the public health department has assigned more than 70 people to the arduous task of epidemiological investigations, including contact tracing.

Other teams there are involved in managing outbreaks in specific settings, such as schools, retirement homes and workplaces.

Laval's regional directorate says that it is currently able to identify all the infected people's contacts: its own staff calls close contacts and delegates the job of reaching others to the infected person.

"We also hope that the tighter containment, announced by the government, will have a beneficial effect on the number of cases which have continued to increase since this fall, which would allow us to resume epidemiological investigations as a whole," said Judith Goudreau, from the Laval Integrated Health and Social Services Center, in an email.

In its worst cases, Laval's public health team had to reach 60, 80 and even 100 contacts for a single infected person, she said.

This report by The Canadian Press was first published Jan. 15, 2021.