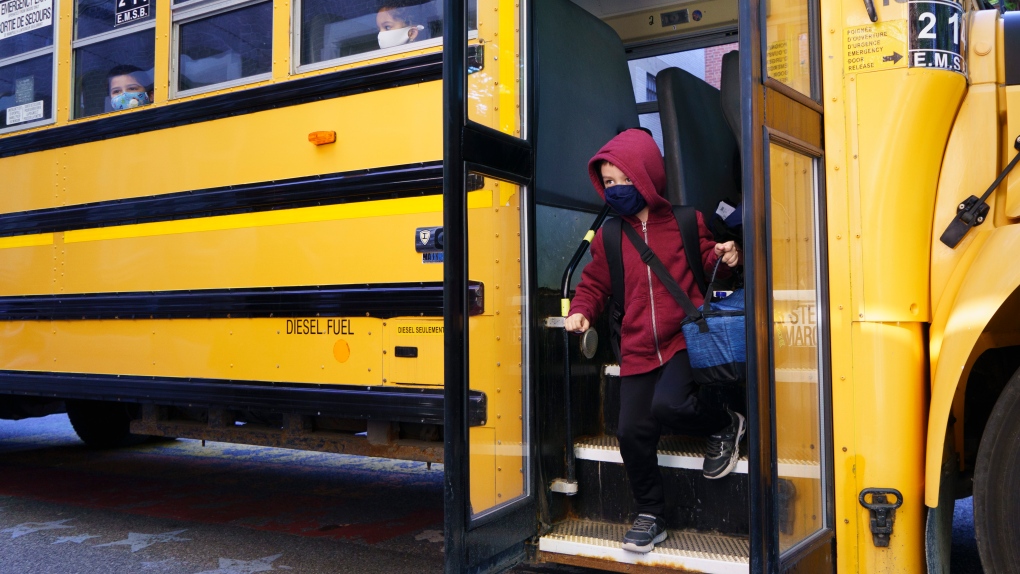 A student walks off the bus at the Bancroft Elementary School in Montreal, on Monday, August 31, 2020. THE CANADIAN PRESS/Paul Chiasson

MONTREAL -- There is a difference of opinion on how Quebec's public health authorities have informed the province's bus drivers and their unions about whether or not they are transporting students who have tested positive for COVID-19.

“We have the right to know. Especially since some school carriers, in particular the important Sogesco company, have unfortunately not installed protective barriers in their vehicles, even though this is the best way to protect drivers against COVID-19," said president Stephen P. Gauley.

Andrew Jones is the owner of the Autobus Beaconsfield and Transport Scolaire Elite school bus lines and disagrees with the FEESP-CSN's analysis of the situation.

"That's not been my case at all, and I'm at the same school boards that this union is at," said Jones.

Jones said that the directives vary from school board (or service centre) to school board, but that some things remain the same. All buses have an assigned seating chart and the companies are informed if a COVID-19 case is among the list of students.

Two weeks ago, for example, Jones was notified on a Friday at 8 p.m. that he may be transporting a child who tested positive for COVID-19.

The child never took the bus.

Jones said an investigation into what type of mask the child was wearing was initiated. If they weren't wearing a surgical mask, further action is taken.

"If they have been transported, the child's entire row, the row in back of them and the row in front of them are put in quarantine immediately for 10 days if they haven't been wearing a surgical mask," said Jones.

He said he's seen the same procedure in action in Laval and on the North Shore as well.

"They're not screwing around - Sante Public," said Jones.

Gauley feels most boards or service centres offload the problem to public health. He would prefer that the school board transfer the information directly to the transporters so they can analyze whether there is a risk or not.

He added that the bigger school bus companies such as Sogesco are often negligent in installing Plexiglas barriers between the drivers and the students.

"They don't feel that they need any barriers," he said. "Even if they say you want to put on a mask and glasses, it's not getting rid of the problem... We feel there should be a barrier around the bus driver."

Students below Grade 5 are not required to wear masks and often sit at the front of the bus - less than two metres from the driver - for more than 15 minutes. Gauley said smaller companies (like Jones') have no problem putting barriers in their buses, whereas bigger ones cite cost as a reason not to install Plexiglas.

"Most of them that put them up are the smaller companies," he said. "The ones making big money like Soresco, they don't want to put them up and they say it's too costly... We feel they should put them up."

In addition, a significant number of drivers are over 60, and most vulnerable to the novel coronavirus.

A FEESP-CSN release reads that Quebec's Ministry of Education requires school administrations to notify parents and staff when a student tests positive for COVID-19, but they are not required to notify bus drivers.

"We are asking the ministry to change its rules requiring that information on COVID-19 cases be transmitted to drivers," said FEESP-CSN vice-president Jean-Pierre Bourgault. "The information is easy to establish since a computerized system makes it possible to know in which circuit each pupil is."

Jones said his drivers are aware of the situation.

"We are made aware that we may have been transporting potential COVID-19 patients," said Jones.

The Ministry of Education did not respond to CTV News' requests for further comment at this time.