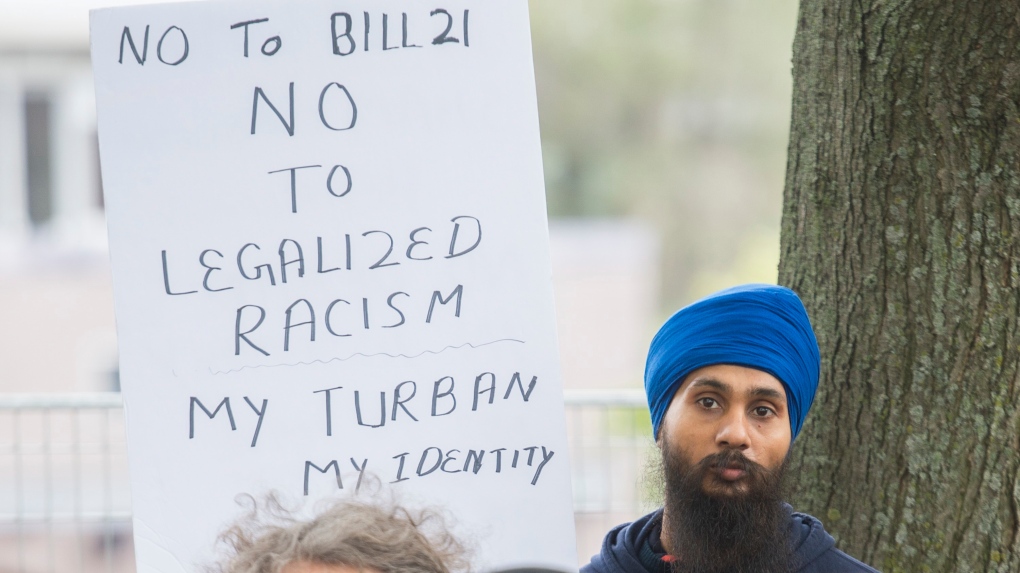 MONTREAL -- Quebec's attorney general argued Wednesday that the province's state secularism law does not deny freedom of religion -- rather, it frames it.

After hearing arguments against the controversial law in court for several weeks, the attorney general's office will take the next two days to plead its constitutionality.

The piece of legislation, known as Bill 21, is being contested by several groups who want to have it struck down, in whole or in part.

Adopted in June 2019 by the National Assembly, it prohibits the wearing of religious symbols by certain public employees when they are performing their functions, including police officers and Crown prosecutors, as well as to teachers in public primary and secondary schools.

Attorney Andre Cantin argued that the debate has been "emotional and loaded" for a long time.

"The State Secularism Act does not violate the fundamental freedoms of citizens," he continued, a comment that made Superior Court Justice Marc-Andre Blanchard jump.

Hijab-wearing teachers testified at the start of the trial, arguing that they could not imagine teaching in their classes without their headscarves.

"(It's) inconceivable," one said, saying that it was an integral part of her identity.

"What is the point of guaranteeing freedom of religion if it is then to be denied in school?" asked the judge.

The law does not deny this freedom, it frames it, retorted the prosecutor.

"It is a justified constraint," said Cantin.

"Freedom of religion is not absolute, in any context. The ban on religious symbols at school is a ban in a specific sphere, which does not prevent citizens from practicing their religion everywhere else."

ATTACKS ON THE LAW

Since Nov. 2, various groups have marched in front of Justice Blanchard to argue that the law is contrary to various sections of the Canadian Constitution and the Charter of Rights and Freedoms.

Those who challenge it believe that it is particularly discriminatory against religious minorities, including Muslim women, who would be particularly targeted by the law.

Among those who have challenged the law since the beginning of November are the National Council of Canadian Muslims, the Canadian Civil Liberties Association, teachers -- some of whom wear the hijab -- along with the federation of education professionals (FAE) and the English Montreal School Board.

The government of Quebec also has allies who will present arguments to preserve the law in its entirety, including the Mouvement laïque québécois (MLQ), which says it wants to defend the rights of students and parents, and the organization "For the rights of Quebec women" (PDF).

This report by The Canadian Press was first published Dec. 9, 2020.