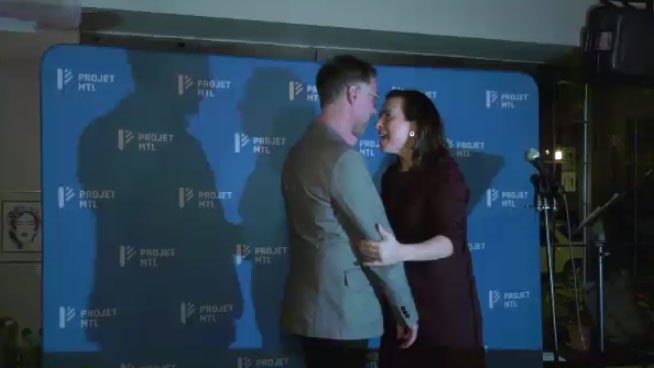 Montreal Mayor Valerie Plante congratulates Luc Rabouin, the candidate from her Projet Montreal party, after he won a mayoral by-election in Plateau-Mont-Royal on Oct. 6, 2019.

Projet Montreal’s Luc Rabouin will be the next mayor of the Plateau-Mont-Royal borough following a blowout win in Sunday's by-election.

Rabouin beat out Ensemble Montreal’s Jean-Pierre Szaraz and Marc-Antoine Desjardins of Vrai Changement Pour Montreal. Of the 15,858 valid ballots cast, 10,631 were cast in favour of Rabouin.

"I'm very happy and proud of the work we've done and the support we received from the citizens of the Plateau," said Rabouin. "It's a very clear, strong mandate to continue the work of the ecological transition in the Plateau and Montreal."

He will succeed Luc Ferrandez, the former mayor who stepped down in May due to differences with Projet Montreal on environmental policy. While following the victory Montreal Mayor Valerie Plante said she was proud of of the Plateau's work in environmental initatives, Rabouin said he didn't feel he was filling Ferrandez's shoes but would work to form his own legacy in the borrough.

"We have a lot of challenges and I want to work with the citizens and local organizations to face all the challenges we have for a greener Plateau and higher quality of life for families," he said. "I met with the local merchants' association and they're very happy to work with a mayor who has experience in local economic development. I told them we will work with them as partners because we all know having merchants near our houses is a clear advantage to our quality of life."

Rabouin ran on a platform of making the borough more accessible for cyclists and imposing rent control for neighbourhood merchants.

A longtim emember of Projet Montreal, the 51-year-old Rabouin had previously served as head of an economic development group in the Plateau and had also worked as a community organizer and environmental advocate.