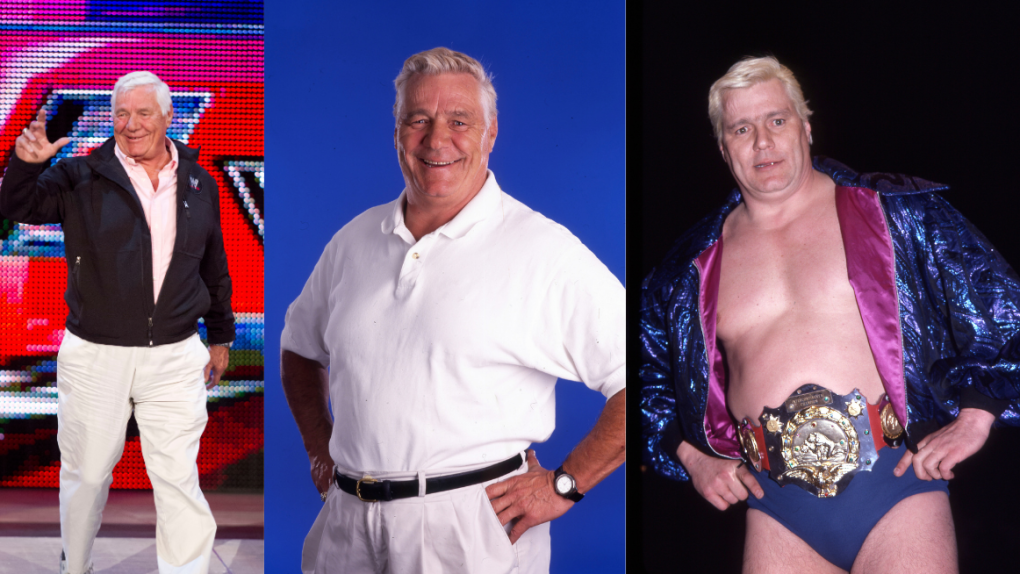 Pat Patterson worked with wrestlers to help them develop the narrative beats of their matches and specialized in coming up with memorable finales. He was also the inventor of the Royal Rumble. SOURCE: WWE

MONTREAL -- Pro wrestling trailblazer Pat Patterson has died at the age of 79.

WWE announced the passing of the Hall of Famer on Wednesday morning.

Born Pierre Clermont in Montreal, Patterson rose to prominence as a wrestler in the Pacific Northwest and San Francisco territories during the 1960s and 1970s before moving to the New York-based World Wrestling Federation in 1979.

He was the first-ever intercontinental champion for the WWF -- now known as WWE -- before transitioning to a behind-the-scenes role in the 1980s.

Patterson worked with wrestlers to help them develop the narrative beats of their matches and specialized in coming up with memorable finales.

"Pat Patterson was the Yoda to my Luke," said former WWE champion Chris Jericho, who is from Winnipeg, in an Instagram post. "He taught me 90% of what I know about putting together a wrestling match.

"Beyond that he was a confidant, a mentor, collaborator, a sounding board, an oracle, a prophet, a genius, a comedian, a singer and most importantly.... a friend."

Sami Zayn, who is also from Montreal, tweeted about how Patterson had looked out for him when he first signed with WWE.

"NO ONE was a bigger supporter, advocate, or believer in me than Pat Patterson," said Zayn. "NO ONE went to bat for me more often than him. I feel lucky to have had him in my life."

Patterson was also the inventor of the Royal Rumble, a signature event on the WWE schedule that was first held in Hamilton in 1988.

He rose to on-screen prominence again in the late 1990s, playing the role of a bumbling but villainous "stooge" to WWE owner Vince McMahon along with friend Gerald Brisco.

"I can count on one hand the people who had the deepest understanding of great psychology in pro wrestling, and perhaps Pat was the greatest ever," said Calgary's Bret (The Hitman) Hart in a lengthy Instagram post.

"His ultimate contribution can never be properly measured, but to those who know, Pat will always stand the tallest."

I’m very sad to learn of the passing of wrestling legend Pat Patterson. Few minds in the profession had the depth that...

Patterson legally changed his name to Pat Patterson in 2008.

Patterson was openly gay, having come out in the 1970s, but his sexual orientation was never directly acknowledged on television until 2014 when he spoke about it on a WWE-produced reality TV show.

Louie Dondero, Patterson's longtime partner of 40 years, died of a heart attack in 1998.