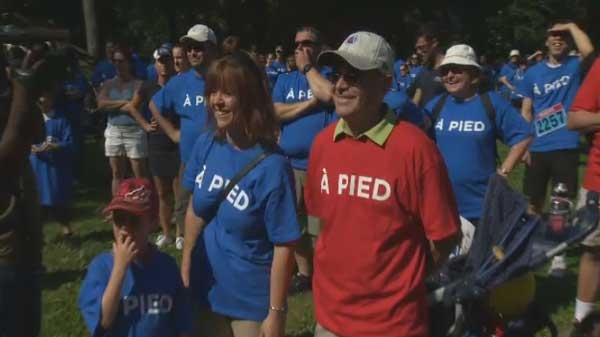 Over 800 took to the streets of Montreal on Father's Day for the Procure Walk of Courage.

MONTREAL — For six years, Montrealers have taken to the streets on Father's Day to raise money and awareness about prostate cancer. It was no different this year.

Over 800 took part in the 2012 Procure Walk of Courage, raising $450,000 to fight the most commonly diagnosed cancer among Canadian men.

For people like Jean Page, the walk could save lives.

"It's terrible," said Page, who didn't talk about his prostate cancer for four years after his surgery in the mid-90s. "Each time the garage calls, we go and change our oil and yet we don't take care of our health."

Procure promotes screening for prostate cancer—something still considered taboo by some men. Robin Burns co-founded the walk to end the taboo, knowing that one in seven men will be diagnosed with the cancer.

"I said look at the women of this city what they do for breast cancer. It's absolutely amazing. They walk two days and look at the men. We sit on ours ass and that's why we all get cancer. Let's do something," said Burns.

Burns and Father John Walsh approached Page with the idea.

"What is really amazing are the people with their red shirts saying that were survivors," said Walsh of the walk.

If detected early, there is a 96 per cent survival rate for the disease.

The Montreal Canadiens and Alouettes have supported the walk of courage since its inception, as has Montreal Impact President Joey Saputo.

"I keep coming back. My father went through it and thank god he's OK now. So for me it's something personal and I think it's important to get involved in the community," said Saputo.