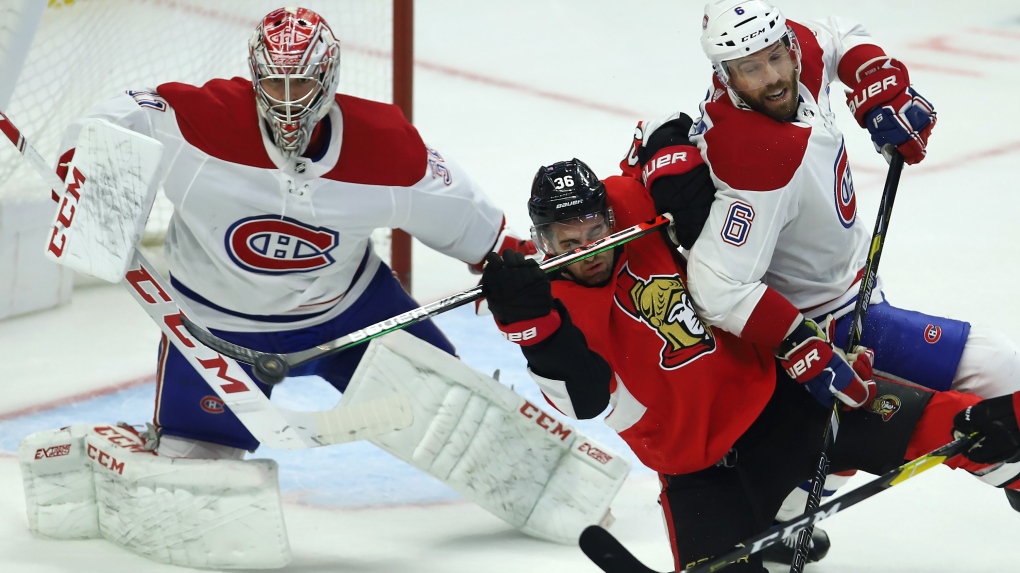 OTTAWA -- Max Domi had a pair of goals Saturday night as the Montreal Canadiens beat the Ottawa Senators 3-0.

Carey Price stopped 30 shots for his fourth shutout of the season, while Paul Byron also scored.

Already playing without Tyler Ennis and Vladislav Namestnikov, both healthy scratches, the Senators (21-30-11) then lost Thomas Chabot midway through the first and struggled to create anything offensively.

Craig Anderson made 32 saves in defeat.

Ottawa's Brady Tkachuk was a thorn in Montreal's side all night. Tkachuk got under Price's skin right from the start and drew a penalty as the Montreal goaltender punched him in the head. He finished the game with nine hits and three shots.

Holding a 3-0 lead to start the third the Canadiens tightened up defensively and kept the Senators to the outside.

Price made a few big saves, including a glove save on Anthony Duclair to keep the Senators off the board.

An Ottawa turnover allowed Ilya Kovalchuk to find Byron all alone out front to beat Anderson at 17:58 of the second.

Domi scored twice to give the Canadiens a 2-0 first-period lead.

Domi avoided Anderson's poke check and then scored off his backhand to open the scoring just 1:13 into the game.

The Senators had a scary moment midway through the period when Chabot went down awkwardly after being checked into the boards by Brendan Gallagher. He struggled to get off the ice and went right to dressing room. Tkachuk took exception to the hit and took on Gallagher.

During the TV timeout Chabot took a brief twirl on the ice, but would not return.

The Canadiens took a 2-0 lead shortly after as Domi took a bounce off the dasherboard and one-timed it through Anderson's legs.

Notes: Josh Norris made his NHL debut Saturday night with the Senators. Montreal's Karl Alzner played his first NHL game since Jan. 10, 2019, after being recalled from Laval of the AHL.