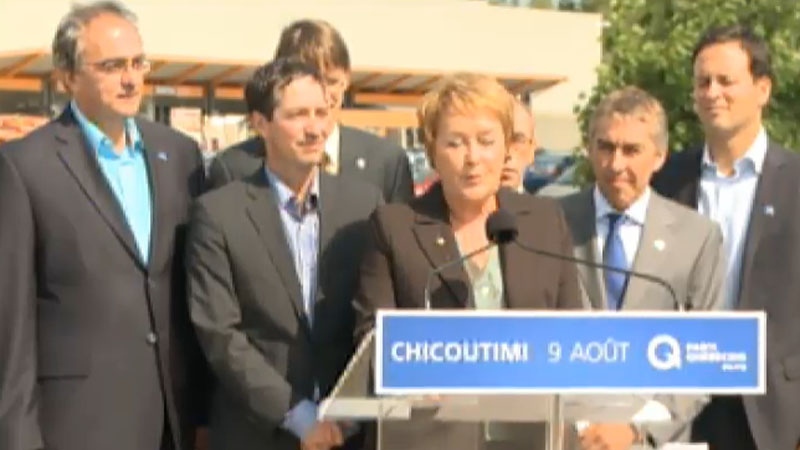 The Parti Quebecois leader said Thursday that the province's investment agency, the Caisse de Depot et Placement du Quebec, has lost focus during the Charest era and needs to return to its original goal: promoting Quebec.

Marois said a PQ government would create of a $10 billion fund designed to protect Quebec companies from foreign takeovers.

"It's fundamental. It's what we need to promote our companies," said Marois.

However the PQ leader said that the fund would not require any additional spending by the government.

"Essentially it's money that's already being used by the Caisse de Depot," said Marois. "We would order the reserve of $10 billion to protect our head offices, our rising stars, and development in growing sectors."

She criticized the direction the Caisse has taken during the past decade, saying a focus on creating wealth above all led to risky decisions, including being over-exposed to asset-backed commercial papers in the U.S.

That led to a $40 billion loss in 2008 when the U.S. housing market collapsed -- one quarter of the agency's total value.

That loss was hardly unique. In that same year the Canada Pension Plan lost more than 14 per cent of its value, while other provincial investment arms saw similar results.

In the years since the Caisse has recovered and now has $159 billion in assets.

Marois also said that she would not be likely to replace Michael Sabia, who has led the Caisse since March 2009.

"I don't want to judge Michael Sabia. We have seen that he is very sensitive to investing in Quebec," said Marois.

"I will make sure that the head of the Caisse understands our vision."

The PQ is also proposing tighter restrictions on companies saying that during the past nine years the number of companies moving their head offices out of Quebec has accelerated.

"We would increase the responsibilities of administrators," said Marois. "They would have to take into account not only shareholders, but employees, clients and suppliers."

Nicolas Marceau, the MNA and candidate for Rousseau, said the goal is also to protect companies from falling into foreign hands.

"We also want to make sure that when a company refuses a hostile takeover, it would be protected," said Marceau, pointing out that similar legislation exists in several U.S. states.