The Parti Québécois (PQ) is appealing to other political parties to grant them official party status, something that would give them more money and more visibility in the national assembly.

Following Monday night's election, they say the system is unfair, as other parties have also complained that the current electoral system is "broken" and is in need of an update.

The PQ said it makes little sense that the Quebec Liberal Party got official party status even though the PQ got more votes — and a higher percentage of the vote — than the Liberals. The party is also deploring Liberal Leader Dominique Anglade for getting in the way of the separatist party from gaining the official status, and is calling on her to show some "introspection" and "humility."

After Monday's election, the Liberals got 591,077 votes (14.37 per cent of the vote) and 21 seats, whereas the PQ got 600,708 votes but won just three ridings. It harkens back to the old seats versus votes debate that was once again reignited after the 2022 election results came in.

"Given these results, we cannot accept that a party that got less votes than us considers itself legitimate to prevent us from representing more votes than them," said Pascal Bérubé, the PQ MNA for Matane-Matapédia, on Friday.

By comparison, Québec solidaire also got more votes than the Liberals — 634,535 votes or 15.43 per cent, according to Elections Quebec. 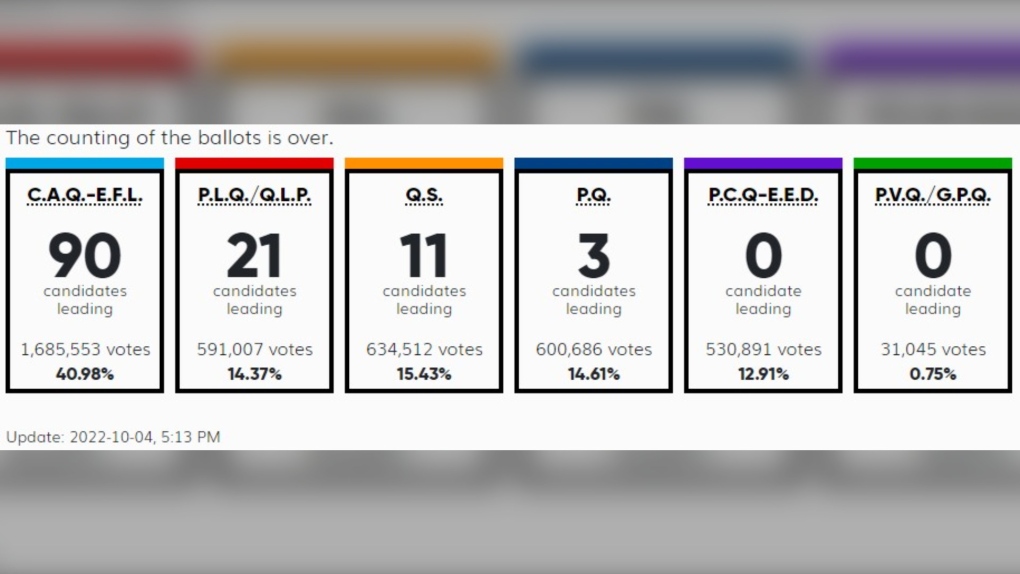 The breakdown of voter support for the major political parties in Quebec after the Oct. 3, 2022 election. (Source: Elections Quebec)

With official party status, the PQ would get about $1 million more to pay for things like additional national assembly staff, research staff, as well as more time in the Salon Bleu to ask questions.

Bérubé said the system is unfair.

"We can't stand this kind of system that doesn't count every vote in democracy. So the winner takes it all. If you win the seat, you have 100 [per cent] of the power. It cannot work that way anymore," he said Friday.

In order to be given official party status, MNAs in the national assembly would have to vote unanimously in favour of it. The PQ says for now, the Liberals are holding out.

Marit Stiles is expected to be confirmed as the new leader of the Ontario NDP today.

A train derailment and resulting large fire prompted an evacuation order and a declaration of a state of emergency in an Ohio village near the Pennsylvania state line on Friday night, covering the area in billows of smoke lit orange by the flames below.