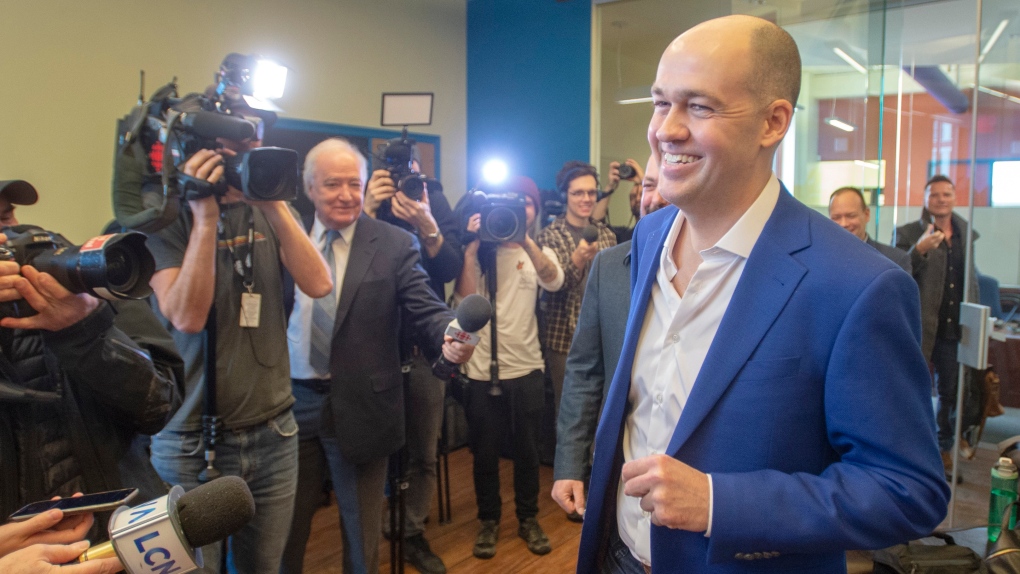 Guy Nantel speaks to the media after announcing his candidacy for the leadership of the Parti Quebecois Thursday, February 13, 2020 in Montreal. THE CANADIAN PRESS/Ryan Remiorz

MONTREAL -- Parti Québécois (PQ) leadership candidate Guy Nantel’s profile was removed for two days on Friday from the political party's website due to the violation of the rules.

The party accused the Nantel team of having sent an email directly to a large number of members to request funds, the The Canadian Press confirmed from an internal source close to the file.

Candidates must go through political training if they wish to communicate with members in order to prevent them from being inundated with candidate emails.

The party’s general manager reminded candidates of the rule during an all teams teleconference call Thursday morning.

Shortly after, Nantel's team still contravened the election regulations. The party therefore imposed a symbolic sanction, but one that hurts much more in terms of perception.

“The candidate will no longer be posted on the Parti Québécois website for a period of 48 hours,” the party said in a message sent to the other leadership candidates.

“He is still a candidate and is still participating in the race,” insisted PQ spokesperson Lucas Medernach, while refusing to confirm the reasons for the decision.

Nantel's team claims not to question the regulation, but rather the interpretation of it. According to them, nothing prevents them from communicating with supporters of the candidate, including members.

“If I write to my former university colleagues and send 300 emails, and there are 25 of them who are members, this is not prohibited and that is what we are doing now,” said Nantel spokesperson Martin Beaudry.

They do not understand why “this time, it is no longer correct” when an identical situation occurred before the COVID-19 pandemic and that the electoral officer at the time, Agnes Maltais, who “is not a beginner,” gave them the ok.

The Nantel team maintains that the list of members provided by the PQ does not include email addresses and that, therefore, they are unable to identify the names to be removed from their own list.

They claim to have taken several steps to comply with the interpretation of the party rules, in particular by proposing that the party remove from their email list people who are members and even hire an external firm at their own expense to do this work in a neutral fashion.

“That too didn't interest them,” noted Beaudry.

The sanction “sends a message about our candidate’s integrity when nothing reprehensible has been done,” said Beaudry. “It was done to tell the whole world that Guy Nantel does not respect the rules.”

The PQ has been without a leader since Jean-François Lisée resigned on the evening of the general elections of October 1, 2018, when the party suffered a historic defeat. Matane MNA Pascal Bérubé is acting as interim leader.