Power returned to all but 25,000 following Friday's killer storm

MONTREAL -- Many of the roughly 25,000 Quebecers without power since Friday's storm might have to wait until Wednesday to get their electricity back, Hydro Quebec announced Monday.

The tally as of late Monday afternoon saw under 5,000 Laval homes without electricity, while 12,000 homes in the Laurentians, 7,000 in the Outaouais, and 3,000 homes in Lanaudiere remained in the dark.

The totals reflected an improvement from earlier in the day when a much higher total remained unplugged.

Many Laval and Laurentian residents continued to slowly clean up fallen trees, smashed roofs and other damage suffered in Friday's storm, which left one dead.

At Paul VI pool in Boucherville, lifeguard Laurie-Ève Cormier, 21, was killed when helping three people out of the pool as the storm hit Friday afternoon. A branch fell on her and a six-year-old child and a 40-year-old women, both of whom also sustained serious injuries.

Cormier, a student at UQAM, had worked several summers as a lifeguard for the south shore municipality. Her name was not released until Monday, as her family was in Spain at the time of the incident, according to the La Presse newspaper.

The incident is being investigated by CSST, the workplace safety board.

“They have to assemble the facts, talk to witnesses and the coroner will also be involved in this investigation,” said Longueuil police spokesperson Jean-Pierre Voutsinos.

Eight children, including six toddlers, were injured in Prevost when a tent at a day camp came down on its occupants.

Many streets in Ste Rose Laval, including residential Mont-Royal Ave., were covered with dozens of fallen trees, which fell onto lawns, homes and sidewalks after being uprooted by heavy winds and rains.

At the height of the storm, about 560,000 Hydro Quebec customers had lost electricity. Only half of those homes had their electricity returned by Saturday at noon.

Around 80,000 homes still had no electricity by Sunday afternoon. About 30,000 of those homes were in the Laurentians, while the others were in Laval and the Lanaudiere regions.

Hydro Quebec spokesman Louis-Olivier Batty said on the weekend that much of the work involves clearing away trees and branches from power lines, a job that could take an entire week, according to one Laval official.

Officials were also keen to warn Quebecers to stay away from potentially hazardous power lines.

"We want to advise people not to get close to lines that are either on the ground or hanging lower than usual becasuse we obviously don't know if there is power in those lines," said Laval police spokesperson Frederic Jean.

In Laval, an emergency shelter the the Honore-Mercier Community Centre was set up to accomodate those without electricity. The shelters will allow residents to take hot showers and get updates on the outages, which could take several more days to solve.

The issue isn't only limited to electrical failure and fallen debris: on the weekend residents in Ste. Rose and Vimont weve asked to reduce their water consumption, as the electrical failure has caused a malfunction at the local water filtration centre.

"The water is drinkable -- it's quite safe to drink -- however there might be a slight difference in taste that is normal because of being on an emergency generator," said Jean.

Elsewhere in Quebec, strong winds tore the roof off a hospital in Chicoutimi, while boaters had to be rescued on Lake Kénogami and Lac St. Jean.

The weather could have been the cause of a fire that completely destroyed the city hall in Hébertville-Station on Saturday afternoon.

Areas around Laval, the Laurentians, Lanaudiere and the Outaouais region were hit hardest by the storm, but strong winds caused extensive damage to property and power outages across the province.

“A lot of trees down, a lot of branches down, when those branches touch our lines, basically the system goes off,” said Gary Sutherland of Hydro Quebec.

The storms toppled hydro wires and trees across Quebec and Ontario, leaving hundreds of thousands of people without power and prompting numerous tornado warnings. 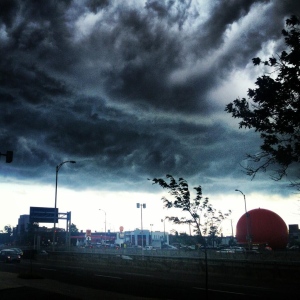 IN PICTURES: Storm looms over Montreal