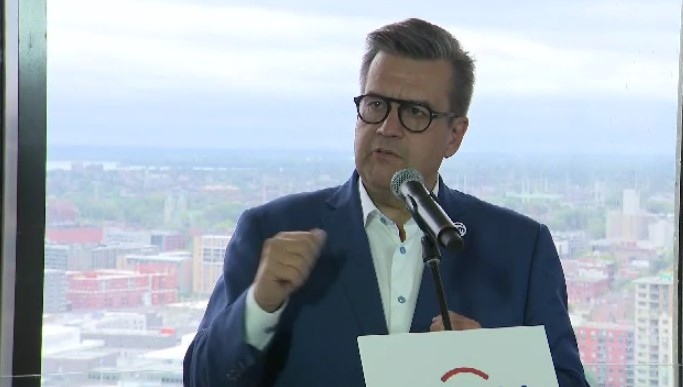 A Montreal police officer has been sanctioned for breaching the ethics code after sharing a copy of a ticket she gave to former Montreal Mayor Denis Coderre with her union.

After admitting at her hearing that she handed over a copy of the statement of offence to the Montreal Police Brotherhood, Quebec’s Police Ethics Committee issued a reprimand against Const. Nancy Chagnon, according to a decision rendered on Dec. 30, 2021.

The officer, who had no previous history with the ethics committee on her record, acknowledged that she should have questioned the police union further before handing over the document, which constituted a breach of trust, in violation of article 5 of the Code of Ethics of Quebec Police Officers. The infraction given to Coderre was for not paying fees to the SAAQ, the province’s automobile insurance board.

The written decision said Chagnon issued the statement of offence to Coderre, who, at the time was not mayor of Montreal, on March 20, 2012, and that she didn’t know who he was then.

“She also confirms that at the time of her interception, Denis Coderre mentioned to her that he would be her ‘future boss,’” the committee’s decision stated.

The union representing Montreal police officers asked for a copy of it two years later, in November or December 2014. The man on the phone asked if the ticket had been paid, but she didn’t know.

“She assumed that this was a document that the Brotherhood could access since she believed that her union would not make a request that could embarrass her,” the decision stated.

The purpose of the sanction was not to send a message that the Brotherhood could not be provided with a copy of a ticket, but noted that the officer “admits that by transmitting the statement of offence without verifying the purpose for which the document was intended, she did not behave in a manner that preserved the trust and consideration required by her position.”

Both the prosecution and the defence submitted a joint submission on sentencing, which the committee accepted as fair.

Thunderstorms kill 5 in southern Ont., knock out power in parts of Que.

As the May long weekend kicked off, a massive thunderstorm in southern Ontario and Quebec brought strong wind gusts that knocked down trees, took out power and left at least five people dead.

Russia pressed its offensive in Ukraine's eastern Donbas region Sunday as Ukrainian President Volodymyr Zelenskyy said the outcome of the grueling conflict would determine whether his country's fate lies with the West or under Moscow's domination.

Biden says monkeypox cases something to 'be concerned about'

U.S. President Joe Biden said Sunday that recent cases of monkeypox that have been identified in Europe and the United States were something 'to be concerned about.'

Australians awoke on Sunday to a new prime minister in Anthony Albanese, the centre-left Labor Party leader whose ascension to the nation's top job from being raised in social housing by a single mother on a disability pension was said to reflect the country's changed fabric.