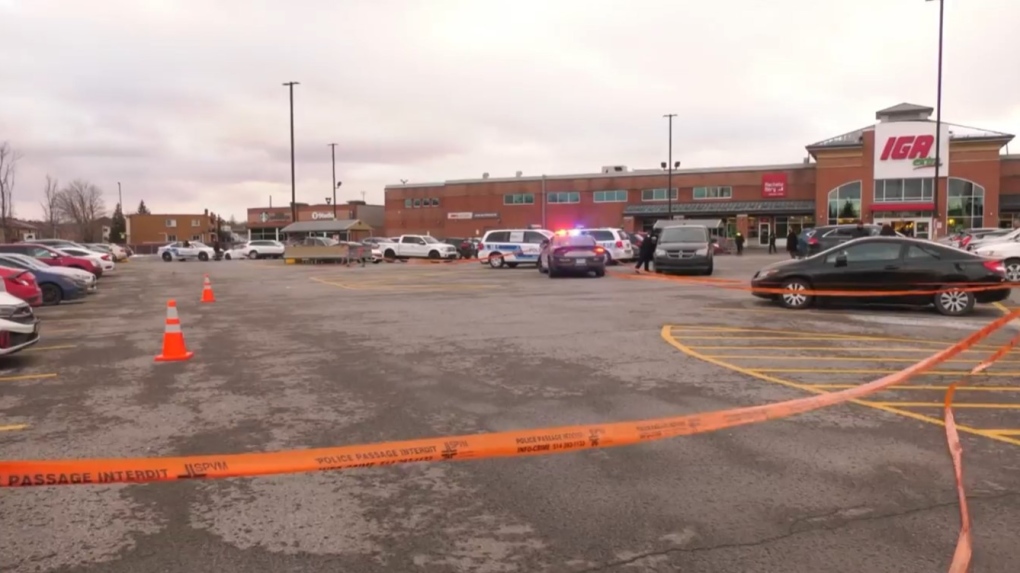 Police tape surrounds the parking lot at the IGA supermarket at 7150 Langelier Blvd. in Montreal's St-Leonard borough after a report of gunshots being fired on Thursday, Dec. 1, 2022. (CTV News)

Around 1:30 p.m., police received several 911 calls reporting gunshots near the IGA on Langelier Boulevard, near the intersection of Bélanger Street.

The suspects fled the scene before officers arrived, but police did find at least one shell casing on the ground, said Julien Lévesque, a spokesperson for the SPVM.

At 5 p.m., police said they had located three suspects in a vehicle near the intersection of 8th Avenue and Montigny Street in the Pointe-aux-Trembles neighbourhood. They then fled on foot before being apprehended by officers with the assistance of the canine unit.

Two 17-year-old boys and a 20-year-old woman were taken into custody and will meet with investigators Thursday evening, according to SPVM spokesperson Rapahel Bergeron. The spokesperson said the shooting was "probably" a targeted incident.

Police are still looking for a second vehicle that was possibly involved.

Members of Parliament are making their way back to Ottawa ahead of resuming sitting on Monday, as the city prepares to mark the one-year anniversary of the arrival of 'Freedom Convoy' protesters.

Video released publicly Friday shows the husband of former U.S. House Speaker Nancy Pelosi fighting with his assailant for control of a hammer moments before he was struck during a brutal attack in the couple's San Francisco home last year.

Though you won't be able to sit on the old, cracked pleather benches and take in the thick smell of gravy and fries, while the gentle sound of clanging dishes provides the soundtrack for your lunch, Zellers plans to roll out food trucks for those 'craving a taste of nostalgia.'

'We must meet this moment': Trudeau delivers speech to Liberal caucus

Prime Minister Justin Trudeau called on his Liberal caucus to meet the moment as Canadians deal with the high cost of living, a struggling health care system and the effects of climate change.

Pamela Anderson is addressing discussion about a story regarding her 'Home Improvement' co-star Tim Allen that is part of her new memoir, 'Love Pamela.'