MONTREAL -- Lucy Earle is spending a lot more time on her feet these days.

An avid cyclist, Earle’s bicycle became a lifeline during the pandemic as a break from being locked down at home. She says she took it everywhere.

She did, at least, until the sidewalk in front of her Plateau home became a construction site. That’s when, she says, everything changed.

“My roommate and I had bikes locked to a bike rack right outside of our apartment,” she says.

Earle says the surprise came after the work had moved up the street.

“We realized that the pole that the bikes were locked to, as well as our bikes, was just gone.” 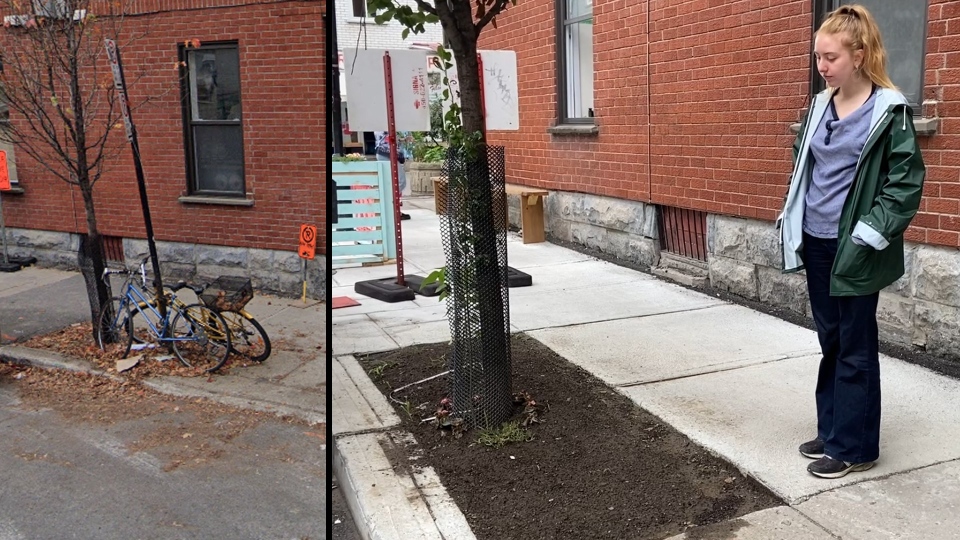 Left: Montreal resident Lucy Earle's bicycle is seen in this older photo locked to a pole near her apartment in the Plateau-Mont-Royal borough (source: Google Maps). Right: Earle stand beside the same spot on Friday, July 9, 2021, where the pole no longer stands. (Luca Caruso-Moro, CTV News)

She says she asked a worker for help, who she says told her the bikes would be returned soon.

“One week passes and we don’t hear anything, another week passes, still nothing. So, I start to get a bit anxious about it,” she told CTV.

The City of Montreal’s website says that if your bike is seized you need to make an appointment to retrieve it.

She found the number she was supposed to call and dialed it in -- no answer.

“(I thought) maybe they’ll pick up, maybe they’ll call me back,” she said. “I kept leaving my number, I kept describing in French, but nothing.”

Earle says she’s called numerous times in the weeks since she last saw the bikes, and nobody has ever picked up.

TIME IS RUNNING OUT

So, where is her bike?

A borough spokesperson told CTV News that if they do have the bikes, they’re probably being stored at warehouse on Bercy St. in Sainte-Marie, and that she needs to call that number she found to retrieve it.

What’s more, time may not be on Earle’s side. The borough will only hold on to a bike for 60 days before it gets recycled.

Earle says the bikes were taken in late May, meaning she has less than a month left before that deadline.

The last stop for bicycles seized in the Plateau is SOS Velo – a charity that collects and recycles used bikes – where many are eventually sold.

“We’re getting close to that 60-day mark now. I’m feeling pretty hopeless about getting my bike back,” said Earle.

“It was just the time that I was looking forward to getting that yearly tune-up and getting to go on those bike rides again,” she said. “Now I feel kind of robbed of that experience.”