Dozens of well-wishers bearing balloons and flowers packed a Montreal airport on Sunday to welcome hundreds of Ukrainians fleeing the war in their home country and poised to begin rebuilding their lives in Canada.

The second of three flights chartered by the federal government touched down shortly before 11 a.m. at the Pierre Elliott Trudeau International Airport with 306 refugees and more than 20 animals on board. The passengers approved for emergency travel to Canada touched down just seven days after the first such flight landed in Winnipeg, and days before the final plane, bound for Halifax, is scheduled to arrive on June 2.

While some newcomers emotionally rushed into the arms of their loved ones shortly after disembarking on Sunday, others made the trip from Warsaw, Poland without knowing what to expect in Montreal.

Alina Shuvalova fled her home in the Donbas region of Ukraine, a heavily bombarded hot spot through much of the three-month war with Russia.

She said she has no relative in Montreal and will be staying in a hotel with her one-year-old baby.

"It’s (a) very hard situation near my city," Shuvalova said on Sunday. "My parents call me that they hear bombing every day and I want to save my baby," she said. "I’m very thankful for this journey and that I’ve arrived here." 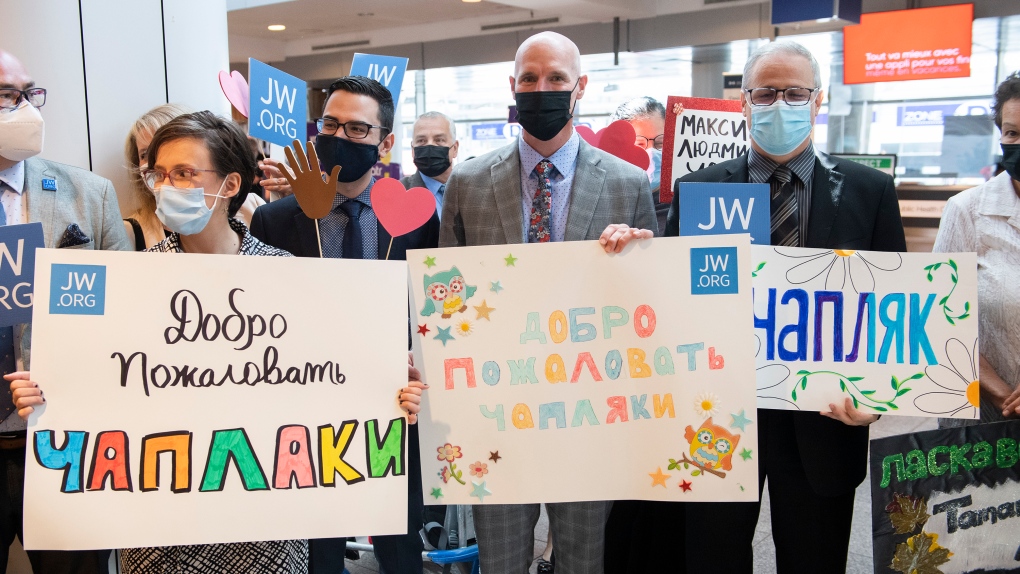 People wait for Ukrainian nationals fleeing the ongoing war to arrive at Trudeau Airport in Montreal, Sunday, May 29, 2022. THE CANADIAN PRESS/Graham Hughes

Yuriy Topolnytsky and his mother had been waiting for hours for their family members to arrive.

"This war took some good people," Topolnystky said. "My aunt’s son, he's been shaking because of the sirens and he's traumatized already. Even when he was waiting in Poland for the visa, he was so relieved … there was no siren."

"He’s a smart guy, he has a lot of opportunities here, maybe he'll become the next Prime Minister of Canada — who knows."

Orysia Krucko of the Ukrainian-Canadian Council, one of the Quebec Immigration Ministry's partners in supporting the Ukrainian settling in the city, said people without host families would be relocated to hotels in Montreal.

"We're happy about this second flight," Krucko said. "But we have to remember that this is a tragedy. These are people that are arriving from a country that is at war." 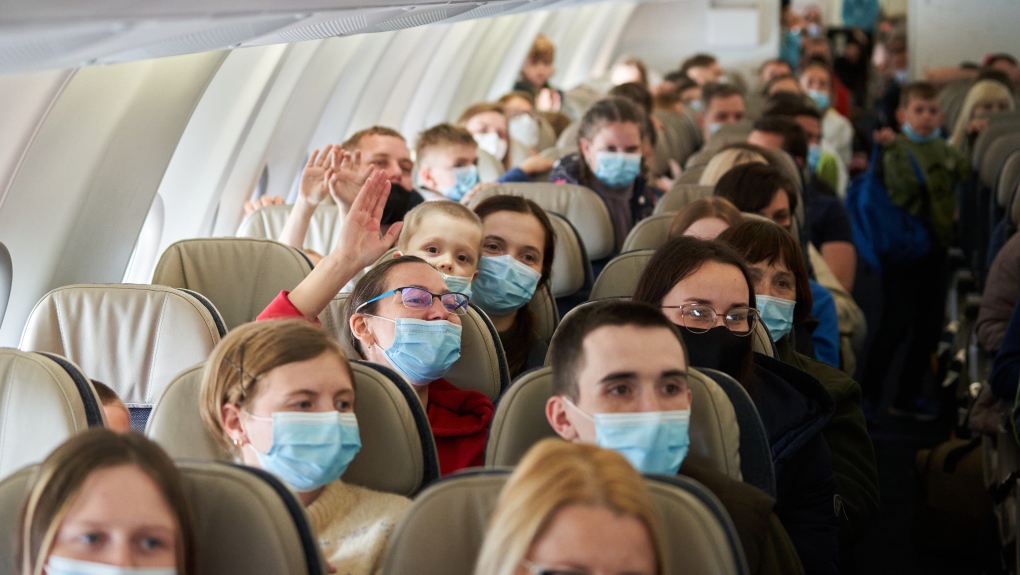 Ukrainian nationals fleeing the ongoing Russian invasion of Ukraine arrive at the Richardson International Airport, in Winnipeg, Monday, May 23, 2022. THE CANADIAN PRESS/David Lipnowski

According to federal government data, Canada has received just over 259,000 requests for temporary residency as of May 25, with 120,668 of those applications approved. The government of Newfoundland and Labrador also chartered a flight earlier this month that brought 166 Ukrainians to the province.

"What we are seeing is the impact of illegal and unjustifiable war," an emotional Joly said at a press conference. "These people never thought that they would have to go to the other side of the Atlantic to seek refuge."

Joly acknowledged Canada could do better when she was asked why it took almost 100 days after the war erupted to fly refugees to safety. She said Ottawa was prepared to offer financial help to newcomers starting June 2.

"These people have gone through hell … all of them are traumatized by what has happened. So we need to continue to welcome them and support them," she said.

Vlada Polishchuk was all smiles as she held a traditional cake at the airport on Sunday. Her family, however, was not among the new arrivals.

"We proposed to my family to fly them here, but everyone refused," Polishchuk said. "They all feel like it’s their home, why would they leave it?"

Polishchuk, who has lived in Montreal for the last seven years, said she even considered going back home to support her relatives.

"But I see that from here, I can be even more helpful even though there was a few stages when I felt so helpless when looking at what’s going on and you’re here in Canada, living your life, it’s two different worlds."

"But being here, it’s the community and support, that’s something that helps me hold still and make a difference."