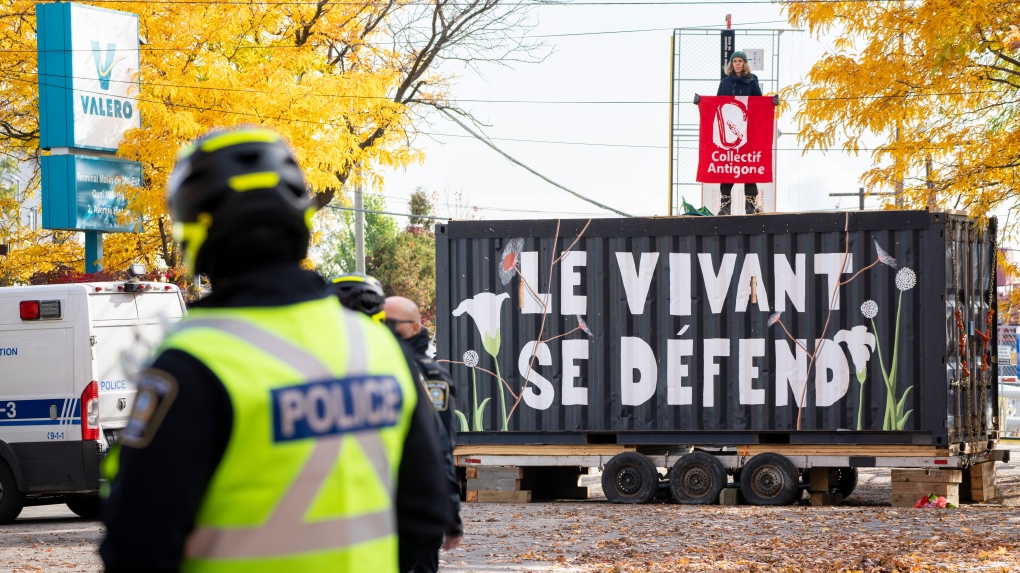 An activist is chained to a shipping container blocking the entrance to the Valero oil transfer terminal in the Port of Montreal in Montreal on Wednesday, October 19, 2022. Protesters demand the closure of the 9B oil pipeline, owned by Enbridge, which ends at this terminal. THE CANADIAN PRESS/Paul Chiasson

A group of climate activists staged a protest on the premises of a fuel company in Montreal Wednesday, with some reportedly chaining themselves to equipment.

In the early hours of the morning, over 20 activists from the group Collectif Antigone entered the Valero Energy terminal in Montreal East.

Some protestors chained themselves to shipping containers while at least one was chained to a crane, according to Montreal police (SPVM). Other demonstrators brandished signs and chanted slogans against fossil fuels.

In particular, they protested the 9B pipeline, which runs between Westover, Ont., and Montreal.

"This pipeline threatens the drinking water supply of millions of Quebecers since it crosses many waterways," reads a post on the collective's Instagram page.

"The climate disasters at our door are an existential disaster for all life on Earth," it continues.

SPVM spokesperson Raphel Bergeron said the protest has been peaceful and no arrests have been made, although officers are on site. Police are reportedly in communication with protest leaders.

"We want it to be passive," Bergeron said.

Protestors were still in action as of 8 a.m. Wednesday.

This is a developing story.