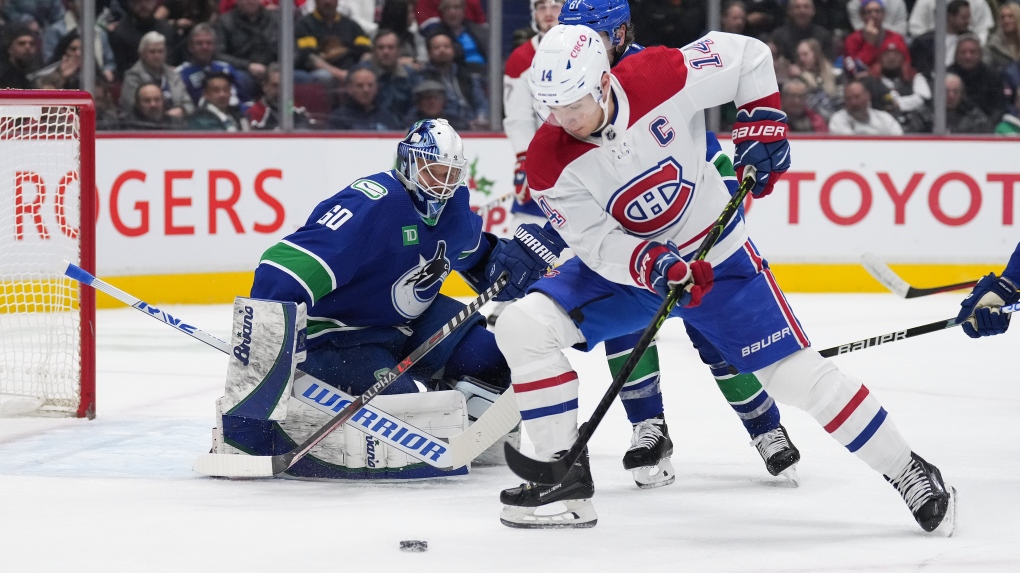 The Vancouver Canucks say they never believed they were down and out on Monday night -- despite what the scoreboard said.

The Canucks (11-12-3) persevered though, and eventually gritted out a 7-6 overtime victory.

"At the end of the day, I don't care how we did it. We got it done," said captain Bo Horvat. "Obviously it was not pretty, we made it pretty hard on ourselves. But we showed a lot of resilience tonight and … it was a fun one. Monday night football game."

Elias Pettersson clinched the victory 13 seconds into extra time, picking the puck off the stick of Mike Matheson in front of the Montreal net and sending a blistering shot through Sam Montembeault's. The Swedish centre threw his hands in the air triumphantly before being mobbed by his teammates along the boards.

"I don't know if it was relief to score that goal or whatever," Pettersson said of the celebration. "But just the overall emotion all game, to be down four and comeback, be down one again and then tie it at the end -- we had a lot of emotions and I'm glad we came out on top tonight."

Ilya Mikheyev scored twice for Vancouver in regulation, while Andrei Kuzmenko had a goal and a helper. Conor Garland, Bo Horvat and Jack Studnicka also scored for the home side. Pettersson and Riley Stillman each notched a pair of assists.

Nick Suzuki had a goal and an assist for the Canadiens, and Cole Caufield, Sean Monahan, Michael Pezzetta, Christian Dvorak and Josh Anderson also found the back of the net. Jordan Harris registered two assists.

Martin struggled in the Canucks' net, stopping 5-of-9 shots before getting the hook late in the first period. He was replaced by Collin Delia who stopped 14 shots. Sam Montembeault had 25 saves for the Habs.

"It was a weird game," said Montreal centre Jake Evans. "But hopefully we can learn to put that extra one in and kind of put the nail in the coffin."

The Canadiens are still a young team that's learning how to win, said coach Martin St. Louis. Monday's game is part of that process, he added.

"All things considered, the emotional roller-coaster we went through in this game and how we managed it, I'm proud of the guys," he said.

The Habs took a 4-2 lead into the third period Monday, only to see the Canucks repeatedly fill their net.

Horvat whittled the deficit to a single goal 4:02 into the final frame, batting in a rebound for his 20th goal of the season.

A minute and 43 seconds later, Mikheyev levelled the score when Pettersson sliced a pass across the crease and the Russian winger fired a sharp-angle shot past Montembeault for his second goal of the game.

Studnicka put Vancouver up 5-4 lead 8:49 into the third, picking off Montembeault's clearing attempt behind the Habs' net and sending a shot up and under the crossbar before the goalie had a chance to get set back in his crease.

Dvorak evened the score 15:23 into the third, redirecting in a Evgenii Dadonov pass from the top of the crease to tie the game.

Montreal retook the lead with three minutes left on the clock when Anderson's shot went off Delia's pad. The rebound bounced out, pinging off the skate of Vancouver defenceman Quinn Hughes and into the net.

Kuzmenko forced overtime with a backdoor tip-in 18:35 into the third.

"I don't know if I've ever been involved in an NHL game like that, quite frankly," said Canucks coach Bruce Boudreau. "I know I've been involved with high scoring games, but nothing when you get down 4-0 in the first period and fight your way back. But I think it'll be a game you remember for awhile.

The Canadiens close out a four-game road swing against the Kraken in Seattle on Wednesday. The Canucks take on the Sharks in San Jose the same night.

This report by The Canadian Press was first published Dec. 5, 2022.