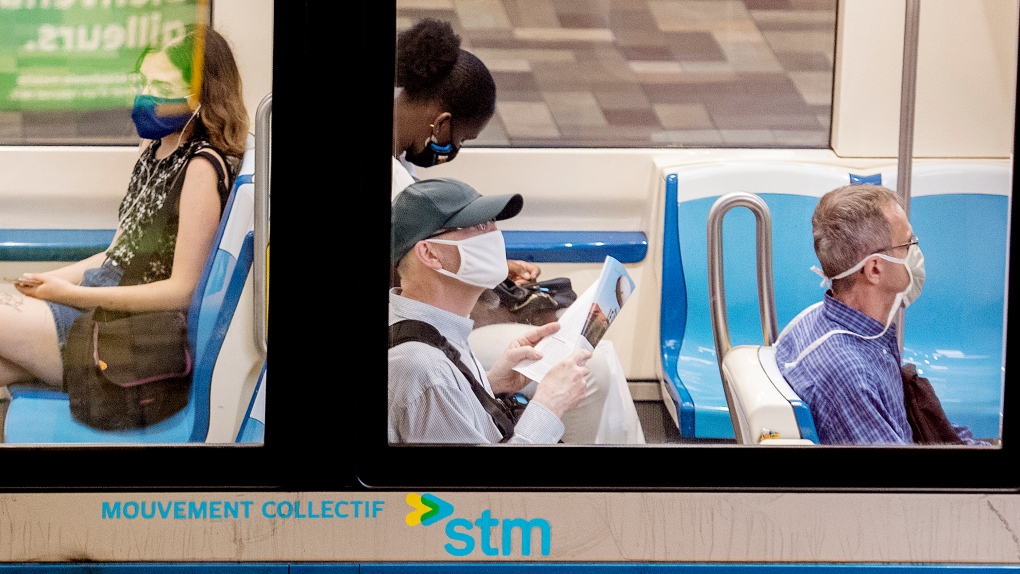 People wear face masks as they commute on a metro in Montreal, Sunday, July 12, 2020, as the COVID-19 pandemic continues in Canada and around the world. Mask wearing becomes mandatory on all public transit in Quebec as of July 13. THE CANADIAN PRESS/Graham Hughes

MONTREAL -- A petition calling on the Quebec government to reverse its mask rule has been removed from Change.org for violating the website’s community guidelines.

Just a day after the government announced it will be mandatory to wear a mask in closed, public spaces across the province as of Saturday, a petition opposing the measure gained nearly 40,000 of its desired 50,000 signatures online.

"Given the heightened attention and reactions to the COVID-19 pandemic, Change.org has updated its approach to petitions that are reported for misinformation," Change.org senior campaigner Sarah Dixon said in an email to CTV News. "Petitions that spread discredited information, are likely to incite panic or which could cause harm are not allowed on the platform."

Among other things, the petition’s description said Quebecers expect the government to provide them with scientific evidence that masks are an effective measure against COVID-19 “before adopting such a measure that violates our rights and freedoms,” though evidence to this effect is widely available online.

Canada’s public health agency says face coverings are an important part of slowing the spread of the COVID-19 virus, and the Center for Disease Control has backed this measure as well.

"We do allow petitions that responsibly debate scientific research or industry standards and which raise concerns without resorting to fear-mongering," Dixon said. "Unfortunately on this occasion, we had to remove the petition because we considered it to be in breach of those standards."

When it comes to whether or not the mandatory mask rule is a violation of personal rights, the Quebec Ombudsman, whose mandate is to ensure respect for the rights of citizens in their relations with public services, said on Tuesday it considers the decision to be “reasonable.”

'Deeply concerned': Canadian mom on what it's like to live in U.S. coronavirus hot spot

'The stigma is real': Front-line pandemic worker says her child was shunned by neighbours

Pattie Lovett-Reid: We need you to go back to work, if you can

'School saved me' from abuse as a child, says mom calling for kids' return to classrooms