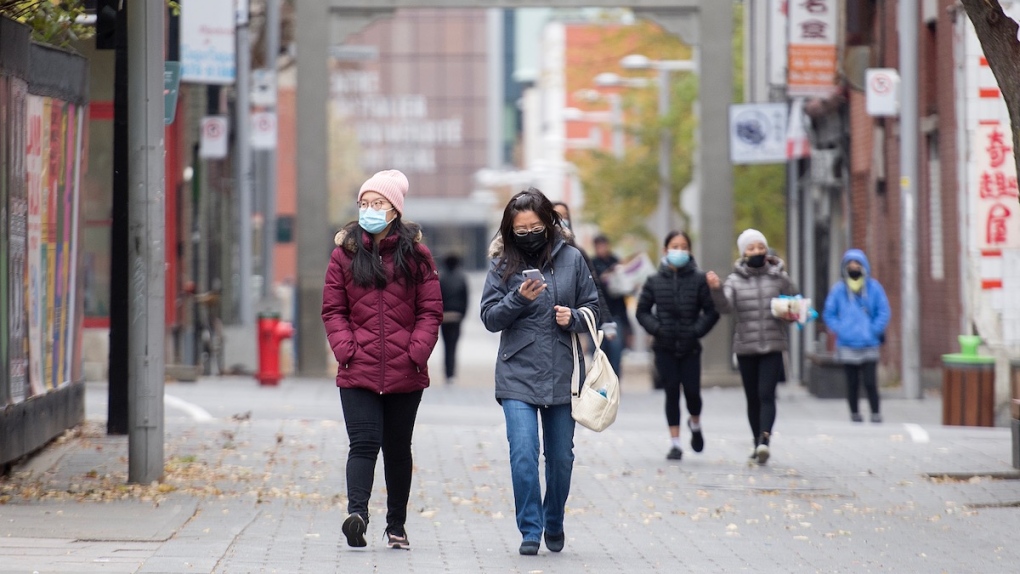 People make their way along a street in Chinatown in Montreal, Sunday, November 1, 2020, as the COVID-19 pandemic continues in Canada and around the world. A campaign called ‘Fortunes for Solidarity’ with the goal to fight anti-Asian racism and bring customers back to the area was launched recently in the area. THE CANADIAN PRESS/Graham Hughes

MONTREAL -- Montreal police say hate-crime charges will not be filed in the case of a Korean Montrealer who was sprayed with a gluey, burning substance that left him temporarily blinded earlier this month.

The victim told CTV Montreal the attack came out of nowhere March 18 while he was walking on Coloniale Ave., on the Plateau, listening to a podcast with his earphones.

Suddenly, someone jumped up from behind him and sprayed him with a thick, gooey, red substance.

Nicolas, who didn’t want his last name published since he fears it would help the attacker find him, said the glue-like substance stuck to his skin and eyelids.

“I fell to the ground,” he said in an interview last week. He couldn’t see well enough to use his phone but knew there was a daycare nearby and began crawling toward it. Workers there helped him and he called 911 using his Apple Watch.

“I remember opening my eyes for like a split second and seeing all the faces" of the children, he said.

Police told CTV News initially that they didn’t consider it a hate crime, but they later decided to bring in the hate crime squad to investigate, saying they'd chosen to take into account the victim's belief that he was singled out for being Asian.

On Friday, police said they arrested four minors the previous day, and they will appear in court April 13. They're all under 18 but police didn't provide their exact ages.

It isn't clear yet exact what charges they're facing, but they're not hate-related. Police say they want to put the hate-crime theory to rest, though they declined to provide details on how they reached that conclusion.

“However, we can tell you that the investigation clearly showed that the motive for the assault was not related to hate towards Asian communities,” Montreal police wrote in an email to CTV Montreal.

Const. Raphael Bergeron said the attack was not necessarily a random one, but also “not due to race.”

“These cases are important to us. We investigate each and every case with professionalism and we want to make sure we cover all aspects of the investigation,” Bergeron said.

“When people feel they were a victim of any type of crime, we’ll investigate it. Every crime is taken very seriously at Montreal police.”

The victim of the attack didn't respond to a request for comment.

The new development comes at a time when reports of hate-related incidents targeting Asian communities are on the rise. Montreal police saw a spike last year, with many incidents related to anti-Asian rhetoric surrounding the COVID-19 pandemic.

Data from the police service show 30 racist acts were recorded between March and December 2020 — five times more than there were in 2019.

The Montreal-based Centre for Research-Action on Race Relations, which often works with victims of hate crimes, is one of many organizations lobbying to revamp the police’s hate crime unit.

CRARR says people reporting possible hate crimes often feel there's a lack of communication and that the unit doesn't explain its actions in their cases.

Currently, it’s staffed by four white officers. A coalition of 40 groups are calling for it to be more multicultural and have additional officers working with it, with specialized training.