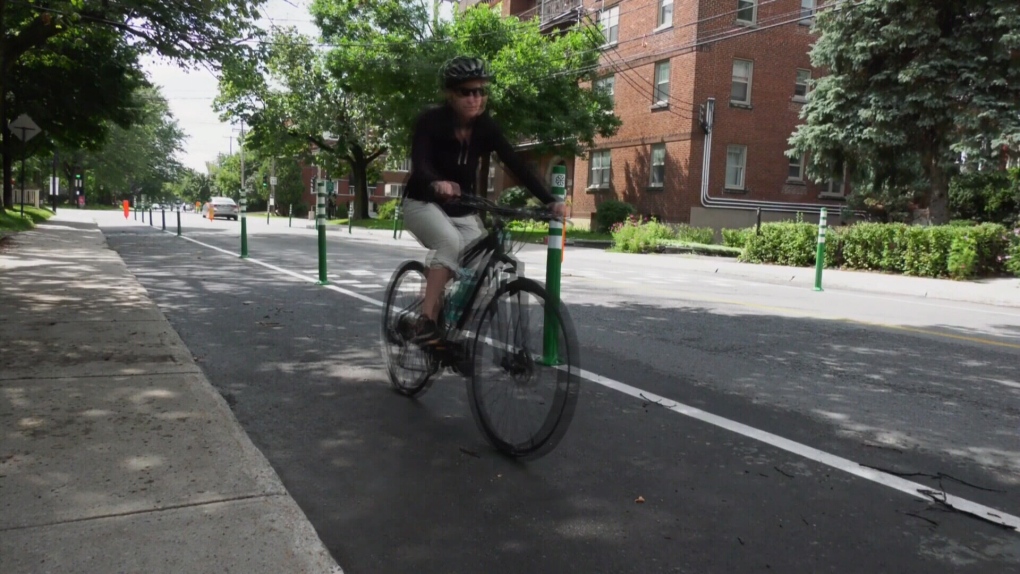 MONTREAL -- After councillors voted to take it down early, some Montreal cyclists and pedestrians are calling on the Notre-Dame-de-Grace borough to leave the Terrebonne St. bike path up.

On Saturday morning, roughly 60 people held a demonstration in favour of the controversial project.

The temporary bike path – installed amid the COVID-19 pandemic – was supposed to come down in October, but some nearby residents, schools and churches requested its immediate removal.

Many said the project went up too early and without consultation, causing headaches for those who live in the area and rely on the street for parking or to access services.

Before the borough voted in favour of removing the path, opposition councillor Lionel Perez called it a "total failure" and a "nuisance."

"We have an old-age home that can’t have people drop them off, we have churches that cannot have any kind of funerals," he said at the time. "It’s created such a difficult situation. Hundreds of parking spots have been removed, so we’re saying it’s been an attempt, it’s a failure, let’s go ahead and have it removed."

On Saturday, the APC-NDG said its petition to keep the bike path installed got as many signatures as the one that called for its removal. It also pointed out that the borough councillors initially voted unanimously in favour of the project.

“From the day the bike path was installed, it was an instant success with many daily cyclists as well as pedestrians for social distancing and by joggers,” Konzak said. “Numerous cycling families use the new protected bike path to get around safely with their children. Now that school has started, many children use it to cycle to one of the three schools of the street, public library and sports complex.”

Borough Mayor Sue Montgomery was disappointed when councillors voted to have the path removed.

"I loved watching the kids riding to school and laughing and riding with their parents," she said.