Partial solar eclipse to be visible from Montreal on Thursday — further north, a rare 'ring of fire' will appear

MONTREAL -- On Thursday, Montreal’s early risers will witness a partial solar eclipse beginning at 5:05 a.m. and peaking around 5:40 a.m., when a crescent-shaped sun will be roughly 80 per cent obscured by the moon.

Further north, some Quebecers will witness an even more extraordinary sight: an annular eclipse, or “ring of fire,” which occurs when the edges of the sun are visible behind the moon, creating a halo of fiery light.

A solar eclipse occurs when the Moon is situated between the Earth and the sun, entirely or partially blocking the sun’s light.

Although the sun’s diameter is roughly 400 times than that of the moon, the sun is also approximately 400 times further from the Earth. From our perspective on the ground, this enables the enormous star to be erased from the sky by an object that is a fraction of its size.

“Just by coincidence, here on Earth, the size of the sun and the size of the moon look basically exactly the same. That doesn’t happen anywhere else in our solar system, from what I know,” says Trevor Kjorlien, urban astronomer and creator of Plateau Astro, an initiative that teaches Montrealers about astronomy.

During a total eclipse, the sun, moon and Earth are in near perfect alignment, causing the sun’s light to be entirely blocked out by the moon. A partial eclipse, on the other hand, occurs when the three bodies are slightly out of line, and only a portion of the sun is obscured as a result.

The reason why one viewer may experience a total eclipse while another witnesses a partial eclipse is dependent on the viewer’s geographic location.

“It’s all the angle that you’re looking at it [from],” says Kjorlien. “I’m looking outside my window right now — there’s a construction pylon out there. I have my thumb lined up with it — but if I just move my head a little bit, the thumb and the construction cone aren’t lined up.”

Like a total eclipse, an annular eclipse results from the perfect alignment of the sun, moon, and Earth. In this case, however, the moon is at its furthest point from Earth, causing it to appear slightly smaller than the Sun. The outcome is a ring of fiery sunlight that encircles the moon — a spectacular sight that, if you’re in the right area, you won’t want to miss.

The upcoming annular eclipse will be visible across northern parts of Quebec, Ontario, and Nunavut. 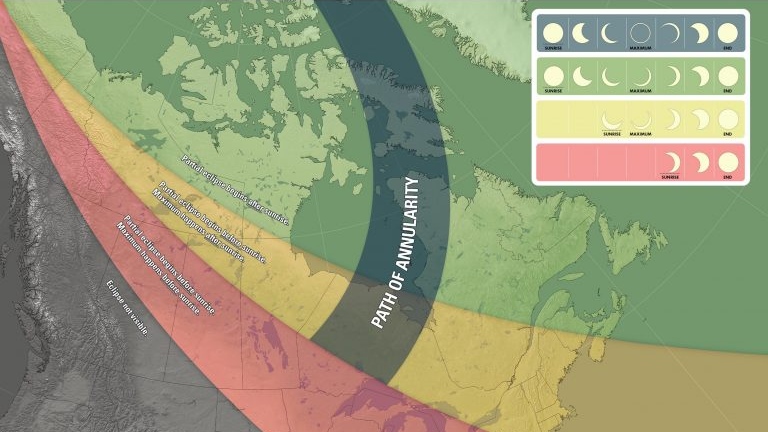 SEE IT FOR YOURSELF

Anyone interested in witnessing the event is strongly advised to wear protective eyewear, says Kjorlien, as looking at the eclipse directly can severely damage the eyes, even causing temporary or permanent blindness.

Regular sunglasses won’t cut it — instead, the Canadian Space Agency recommends the use of specialty glasses that meet the ISO 12312-2 international standard. Alternatively, eclipse enthusiasts can construct their own eclipse projector using a cardboard box, which permits the user to observe the event indirectly.

On the Plateau Astro website, Kjorlien lists a variety of locations across the greater Montreal area where spectators can get an unobstructed view of the eclipse. For those who can’t make it in person, Kjorlien will be running a live stream of the event which can be accessed here.