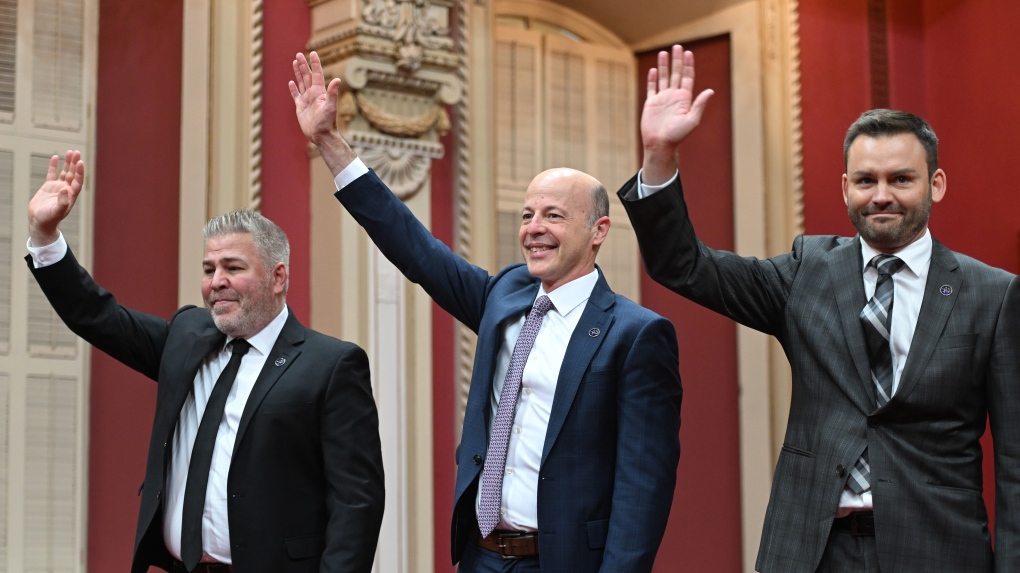 Parti Quebecois Leader Paul St-Pierre Plamondon, right, PQ MNAs Joel Arseneau, centre and Pascal Berube wave to the applauding supporters and family before being sworn in during a ceremony at the legislature in Quebec City, Friday, Oct. 21, 2022. THE CANADIAN PRESS / Jacques Boissinot

The Parti Québécois (PQ) has failed in its attempt to obtain what it considered to be "the bare minimum" in terms of budget and speaking time to do its work in the national assembly.

On Friday, after lengthy negotiations with the three other parties represented in the national assembly, the PQ opposition finally agreed to what it had previously considered unacceptable, namely that it would be given resources that it felt were grossly inadequate to fulfill its role and out of proportion to the popular support it received in the Oct. 3 election.

If the PQ had refused, its three elected members would have been considered independent MNAs, with even fewer resources at their disposal.

On Sunday, in an interview with The Canadian Press, PQ leader Paul St-Pierre Plamondon said he was trying to claim "the right to exist" for his party in the national assembly, believing he was reduced to demanding "the bare minimum" to do his work in the Quebec legislature, starting at the beginning of the next session on Nov. 29.

Under the circumstances, the PQ staff of about 15 people will likely have to be cut in half.

Second, with respect to speaking rights, the PQ wanted a guarantee that it would be able to ask one of the nine questions per day from the opposition ranks. It was offered the right to ask five questions per cycle of 100 questions. The PQ will have to make do with a little more: in the end, seven questions per cycle were agreed upon, which means two per week.

The PQ also wanted to have a seat on the Bureau of the National Assembly, the BAN, which is responsible for managing disputes between MNAs and making decisions on the functioning of the assembly. It was refused, in exchange for "observer" status, without the right to speak.

Normally, to obtain full recognition in the House, the rules of the national assembly require that a parliamentary group has at least 12 elected members or 20 per cent of the vote. Only three PQ MNAs were elected, but it still received 14.6 per cent of the popular vote, which it argued would allow it to claim some form of recognition from its peers.

In question period, which is one of the main windows for the opposition to promote itself and question the government, the speaking time reserved for each opposition party will be divided as follows: for each round of 100 questions, the Liberal opposition will be able to ask 62, Québec solidaire 31 and the PQ only seven.

As a consolation prize, the leader of the PQ will officially have the status of leader of a parliamentary group, so he will be entitled to a limousine and a bodyguard. But he will not have a house leader to assist him in parliamentary work, as he had hoped.

In a reaction on his Facebook page, the PQ leader said he had obtained the maximum possible under the circumstances, denouncing the fact that the process was not independent, with the other parties being judge and jury. He said he observed "very little good faith" around the table.

He said the agreement makes the PQ's work in the House "almost impossible."

He also criticized Premier François Legault who, in the aftermath of the election, said he was open to PQ parliamentary recognition and to collaboration with the opposition.

This report by The Canadian Press was first published in French on Nov. 25, 2022.

Fifteen grade school students in Mexico have been treated after apparently taking part in an internet 'challenge' in which groups of students take tranquilizers to see who can stay awake the longest.