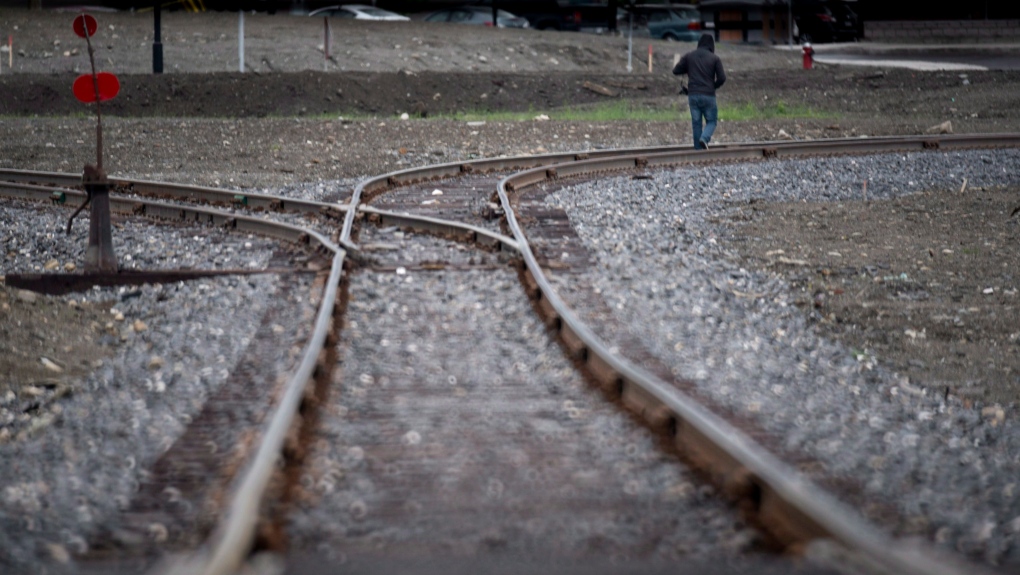 A man walks down the tracks in downtown of Lac-Megantic, Que Tuesday, June 10, 2014, where an oil-filled train screeched off the tracks and exploded killing 47 people. (THE CANADIAN PRESS/Paul Chiasson)
Lac Mégantic, Que. -

Ottawa announced the start of a public consultations on Friday in a new step in the development of the Lac-Mégantic bypass.

The public will be invited to submit written comments on the project, including the main structures planned, construction activities, committees and means of communication with stakeholders, and the operation of the rail facilities, Transport Canada said in a news release.

Those who wish to ask questions orally will also be able to do so at virtual information sessions hosted by the department. Two sessions are scheduled for Jan. 27 from 1 to 3:30 p.m. and from 6:30 to 9 p.m.

This consultation is part of the federal government's application to the Canadian Transportation Agency (CTA) for approval of the project. The consultation report will be made public.

The residents of Lac-Mégantic have been calling for this bypass of their community since the tragedy of July 6, 2013. The derailment of a train carrying crude oil killed 47 people and destroyed part of the town.

Other public consultations have been carried out by the Quebec government, including the environmental assessment and the Bureau d'audiences publiques sur l'environnement (BAPE) consultations, completed in 2019, as well as the Commission de protection du territoire agricole du Québec (CPTAQ) consultation in 2020.

Minister Alghabra noted that it will provide an opportunity to obtain comments from citizens "on the implementation of the next steps of the project, including the construction and operation of the future railroad'."

Agriculture and Agri-Food Minister Marie-Claude Bibeau assured people in the Lac-Mégantic area that work on the bypass "will begin soon."

The governments of Canada and Quebec are funding the bypass construction project, which will be managed and owned by Canadian Pacific (CP).

The new 12.5-kilometre railroad will run through the municipalities of Nantes, Lac-Mégantic and Frontenac, Transport Canada said.

Last November, the federal government said it had set up an office in the area to meet with owners of land to be acquired for the bypass. It had begun submitting initial offers to purchase the land.

The department did not provide a specific date for when construction of the bypass would begin. The federal government had previously said it expects it to be "fully completed by 2023."

More information about the public consulation can be found on Transport Canada's website.

This report by The Canadian Press was first published in French on Jan. 20, 2022.