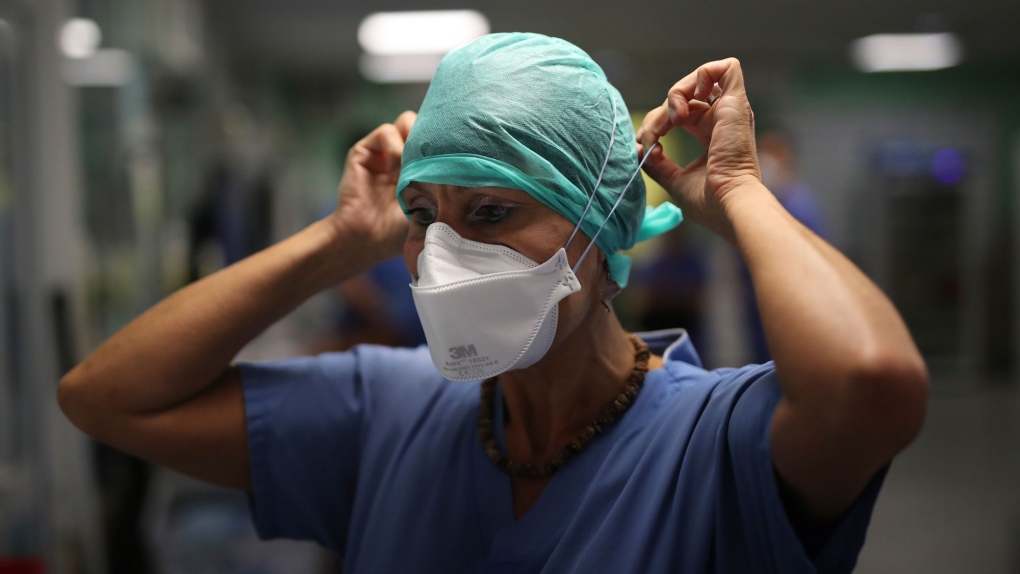 A nurse adjusts her mask in a COVID-19 area in a Marseille hospital, southern France, Thursday, Sept.10, 2020. As the Marseille region has become France's latest virus hotspot, hospitals are re-activating emergency measures in place when the pandemic first hit to ensure they're able to handle growing new cases. (AP Photo/Daniel Cole)

MONTREAL -- At the very beginning of the COVID-19 pandemic, the employees of the CHSLD René-Lévesque were told to stop wearing masks -- and then the masks simply disappeared from the facility, an orderly at the home reported Wednesday.

This week, the coroner's public inquiry into deaths at Quebec long-term care homes began to investigate this CHSLD in Longueuil.

The inquiry's goal is to shed light on the deaths that occurred in CHSLDs and other residences for seniors and vulnerable people during the first wave of COVID-19, in the spring of 2020.

At the René-Lévesque CHSLD, 118 residents were infected with COVID-19 during the first wave of the pandemic, with nearly half -- 54 of them -- succumbing to the disease.

On Wednesday, the third day of the probe into the René-Lévesque CHSLD, an orderly said that in March 2020, employees began to wear medical masks to protect the residents, as well as themselves, from infection.

But they were told not to "exaggerate" and to stop wearing masks because it would scare the residents, reported the woman. She cannot be identified, like the other employees, by order of lawyer Géhane Kamel who is presiding over the inquiry.

Then, shortly afterwards, all the masks disappeared from the CHSLD, the orderly added.

The masks were nowhere to be found, and not just on the floor where she worked, she said. Normally, they're available to staff, especially during outbreaks of the flu.

"The staff weren't very happy. We said to ourselves that with masks, it would have gone better in the residence," recalled the orderly.

She added that there was no shortage of medical masks at this time, because the period she was describing preceded the start of the outbreak at that CHSLD. The first case of infection was reported there on April 4, 2020.

The staff member testified to a serious lack of staff in the facility, before and during the COVID-19 outbreak.

During breaks, the attendant saw other employees sleeping on tables, "they were so exhausted," she said.

She said she thinks it's possible that due to a lack of staff, some of the elderly residents weren't properly hydrated.

"The old people were abandoned," she said.

A nurse who works at the same location raised another concern that there were, in some cases, two residents in the same room, a situation which surely contributed to the spread of the virus.

The CHSLD was "a war zone" until May, she said

This report by The Canadian Press was first published April 21, 2021.