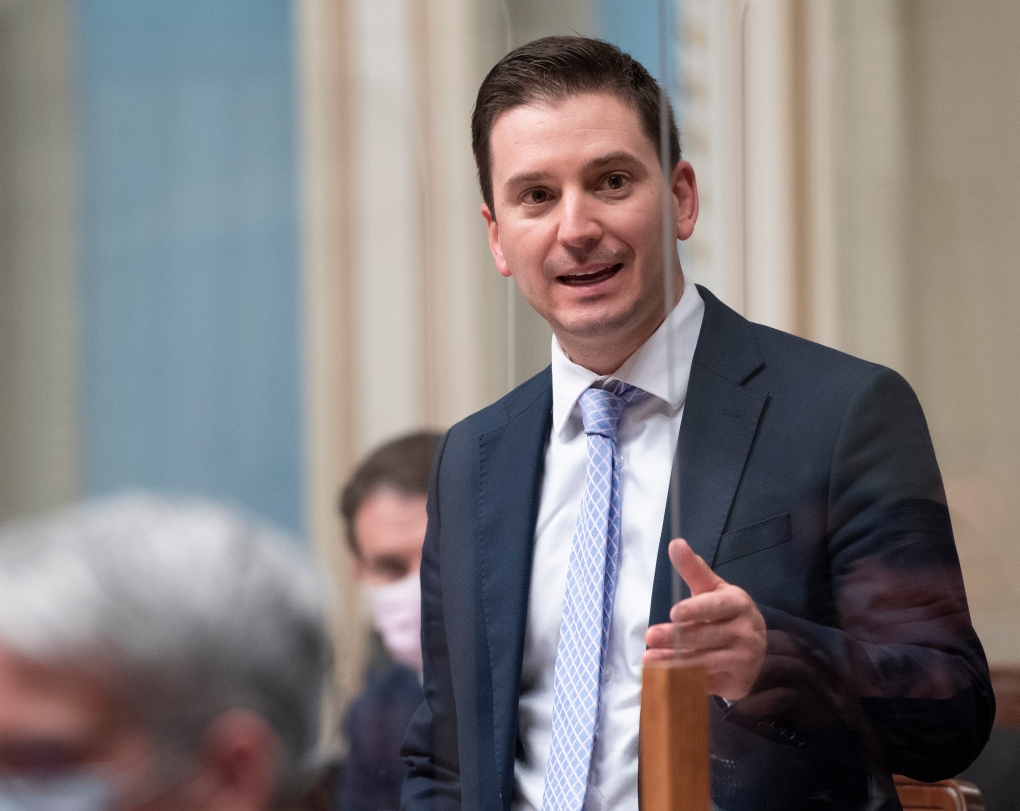 Transgender and non-binary people seeking official recognition of their gender identity, as well as couples looking for a surrogate, are among those likely to be disappointed by the Legault government in the coming months.

At issue is family law reform, which the government has promised to address for years — but with the election just a few months away, the subject is still in the waiting room.

Bill 2, the vast reform orchestrated by Justice Minister Simon Jolin-Barrette, is in all likelihood destined to die by the end of the current mandate.

At least, that's the unanimous observation made by the opposition parties, who spoke with The Canadian Press over the past few days.

The opposition criticized Minister Jolin-Barrette for his "erratic" management of parliamentary business.

A quick glance at the parliamentary calendar, which ends on June 10, has critics asserting that passing such a broad reform in such a short time is virtually impossible.

Bill 2, which would amend the Civil Code, aims to update family law, which has been frozen in time since the early 1980s.

A new legislative framework that touches on several sensitive social issues, the document stretches over 116 pages and contains no less than 360 articles. Normally, a bill of this magnitude might require months of committee work. However, clause-by-clause consideration has not yet begun and is still not on the schedule.

Taking parliamentary recess into account, the minister would have, at best, about four weeks to pass his reform. But officials say this is too little too late.

"The scope of the social implications of this bill is such that it cannot be studied properly, even if we go fast, in four weeks," said Liberal justice critic Gaétan Barrette.

It's "impossible to get it done" by the end of the session, echoed Parti Québécois (PQ) critic Véronique Hivon, who didn't hide her "complete frustration" with the way minister Jolin-Barrette, who is also House Leader, has handled the file.

"If he can't do it because he's overwhelmed, let's change ministers. Let him pass the puck to someone else by the end of the legislature," suggested Quebec Solidaire (QS) MNA Alexandre Leduc, who is convinced Jolin-Barrette has already mourned the loss of this reform in favour of Bill 96, since he is also the minister responsible for the French language.

"I assume he has given up," he says, but has not had "the courage" to announce it.

Bill 96, which aims to strengthen language laws in Quebec, is still under consideration.

Jolin-Barrette is criticized for waiting until the end of the mandate to table these two major reform bills, each with hundreds of sections.

If the minister were tempted to impose a gag order to get Bill 2 through, the three opposition parties warn him: it will not pass.

"It would really be the height of arrogance," said Barrette, who would consider such a move by the government to be "intellectually dishonest."

None of the three elected officials expressed surprise, believing that the fate of Bill 2 reflects the general organization of parliamentary work under Jolin-Barrette.

Hivon spoke of "erratic management," while Leduc believes Jolin-Barrette has not had "much consideration for his colleagues in the opposition."

Bill 2 was tabled on Oct. 21, followed by a brief consultation that was completed in four days in early December. Then, nothing more.

Officially, Jolin-Barrette, who did not respond to a request for an interview on the subject, maintains that he intends to have his reform adopted by the end of the current legislature.

The Liberals proposed splitting the massive bill, with the goal of passing at least part of it by June, but the government refused.

The justice minister had no choice but to legislate on the specific issue of gender, as he had to comply with the Superior Court ruling by Justice Gregory Moore on Jan. 8, 2021, which struck down several sections of the Civil Code as discriminatory.

According to this decision, documents issued by the Directeur de l'état civil could no longer require signees to identify themselves as male or female.

Another change: birth certificates must give the option of using the gender-neutral descriptor 'parent' rather than father or mother.

As soon as it was introduced, Bill 2 caused an outcry. Using the slogan "Get out of my underwear!" the LGBTQ+ community accused the minister of transphobia because the bill initially required a person undergo surgery in order to legally change their gender.

Some saw this as a step backwards, since the requirement was officially abolished in 2013. Those who didn't undergo surgery could have a separate "gender" descriptor on their ID, which was criticized as a "forced outing" of transgender people.

Faced with backlash from the community, the minister backed down and committed to introducing amendments to eliminate the surgery requirement — but this has yet to occur.

Last year, 659 requests for legal gender changes were authorized in Quebec, and the number is steadily increasing.

In addition to gender issues and the regulation of surrogate reproduction, Bill 2 intervenes on a host of other subjects, including the number of first names that can be included on official documents and rules surrounding filiation — including the presumption of paternity for de facto spouses, information disclosed to adopted children, the rights of children growing up in abusive homes, and issues of parental authority in cases of abuse.

— This report was first published in French by The Canadian Press on April 10, 2022.

New research suggests that cutting fossil fuel emissions by adopting electric vehicles can improve air quality and potentially reduce respiratory problems in communities. But these benefits may not apply to all neighbourhoods in the same way.

Justice Minister and Attorney General David Lametti says he is open to amending bail laws, which have come under increased scrutiny following the shooting death of an Ontario Provincial Police officer.