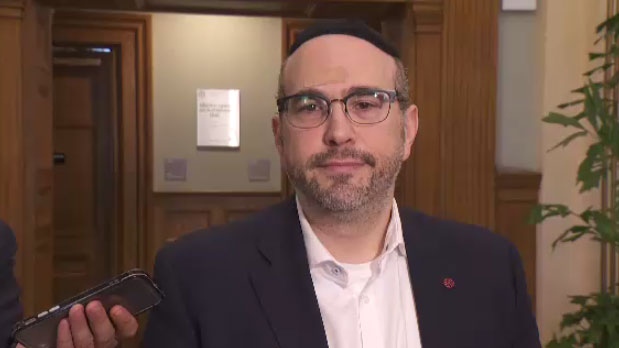 Ensemble Montreal interim leader Lionel Perez questioned Benoit Dorais' ability to carry on as head of Montreal's executive committee in wake of revelation he was pulled over for driving 170 kilometres per hour.

The head of Montreal’s executive committee continued to take fire on Monday over revelations about his driving record.

“You need that weight that when you say something as a representative of the city, of their party, they’re going to have credibility,” he said. “With this incident that is so egregious, 71 kilometres over the speed limit, any time he or Projet Montreal talk about issues about speed, there’s going to be no credibility.”

According to a Le Journal de Montreal report, Dorais was pulled over on Highway 35 one night in April for driving 170 kilometres per hour. Dorais’ license was suspended for seven days and was hit with 14 demerit points and a fine of $1,378.

Dorais admitted to getting the ticket and called his behaviour “a mistake.”

Perez pointed to one of Mayor Valerie Plante’s pet projects as one area where her party’s credibility has taken a hit.

“When we take about Camillien Houde and how it’s moving at a snail’s pace and we’re hearing the mayor say it’s a necessary adjustment, what value is there in those words when we know the number two individual in the city of Montreal has repeatedly gone over the speed limit?” said Perez. “I think the expectation from the population for their elected officials is you have to say one thing and the actions have to follow.”

While city councillor Marvin Rotrand has openly called for Dorais to resign, Perez didn’t go as far but asked whether Plante should still have confidence in him to continue in his role.