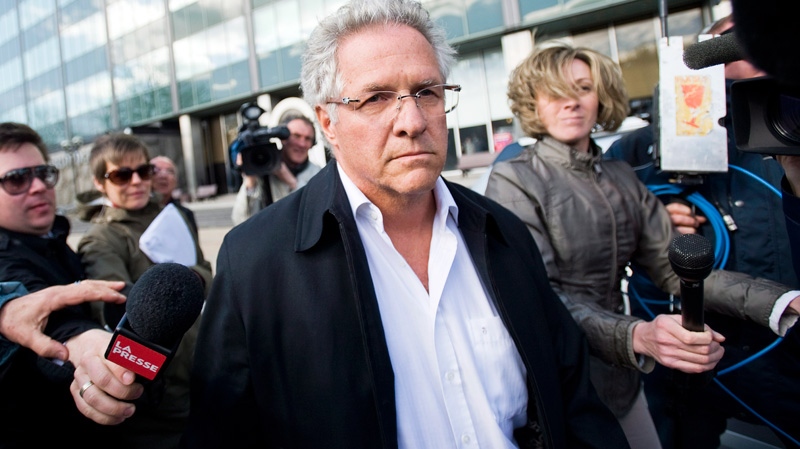 Antonio Accurso leaves the SQ headquarters after being arrested on charges relating to corruption in Montreal, Tuesday, April 17, 2012. (Graham Hughes / THE CANADIAN PRESS)

Despite the city having cancelled four contracts with Louisbourg SBC and Terramex just last week, the two Accurso-connected construction companies received $6 million in new public works. Deemed “urgent” by the mayor, the work was approved despite strong resistance from the opposition.

“Elected officials can’t continue with the painful dilemma of choosing between ethics and serving citizens when it comes to awarding contracts,” said opposition leader Louise Harel.

One of the projects approved on Monday went to landscaping firm Terramex. Valued at $3.4 million, the contract called for the company to rebuild sidewalks and install $2,400 temporary garbage cans in the Place-des-Arts area.

Several of the garbage cans were damaged during student marches in the spring; others were never installed after the refurbishment of the square. The 147 bins will not be compatible with a costly pneumatic garbage system already built under the square.

Despite opposition from the city’s two opposition parties, the vote to approve the contract passed.

“It was a heartbreaking ethical dilemma,” said Olivier Lapierre, the spokesman for Harel. “Some of those sister companies have been recognized guilty of fraud.”

At the centre of an investigation by Quebec’s permanent anti-corruption unit, Louisboug construction was awarded two paving contracts. One of the contracts called for repaving Notre-Dame St. through downtown and the city’s east end for $2 million, the other for resurfacing Outremont’s McEachran Ave. for $750,000.

At the city council meeting on Monday, Harel objected vehemently to the votes being brought to the floor despite a provincial law requiring public bodies to stop doing work with firms found guilty of fraud.

“We cannot accept being forced to vote knowing that certain legal moves were used to skirt the law,” said Harel on the council floor.

According to Bill 35, the province’s construction regulator is required to strip firms of the right to bid for contracts after directors are found guilty of corruption. To circumvent the law, companies either remove offending directors or operate at arms-length from parties found guilty of fraud.

One of Quebec’s richest men, Accurso has been arrested by both provincial and federal investigators on two separate occasions over the past six months. Operating over a dozen companies, the Surete du Quebec has identified a complex structure whereby Accurso indirectly runs companies registered in the names of family members.

The Vision Montreal leader called for the mayor to join her in asking the provincial government to close the loophole that allowed for the contracts to go to Accurso-connected firms on Monday.

According to Harel, Mayor Gerald Tremblay only complained about the loophole in June after a letter was sent from her office to Labour Minister Lise Theriault in late January.

The opposition leader would like to see the loophole closed within 100 days of a new government being elected on Sept. 4.

Opposition to closing of Biosphere

On Monday, Harel also presented Tremblay with a petition to save the Biosphere on Ile Ste-Helene. In June, the federal government confirmed that budget cuts would shutter the environmental museum housed in the iconic structure.

Under current plans, the biosphere would be converted into a weather station, cutting off public access to the landmark. Operated by Environment Canada, the closing of the museum would see 25 jobs lost.

According to councillor Alan De Souza, the mayor's main lieutenant on sustainability matters, the city is not supportive of the federal plan.