Opinion: Quebec's response to COVID-19 crisis an example of how not to handle a pandemic 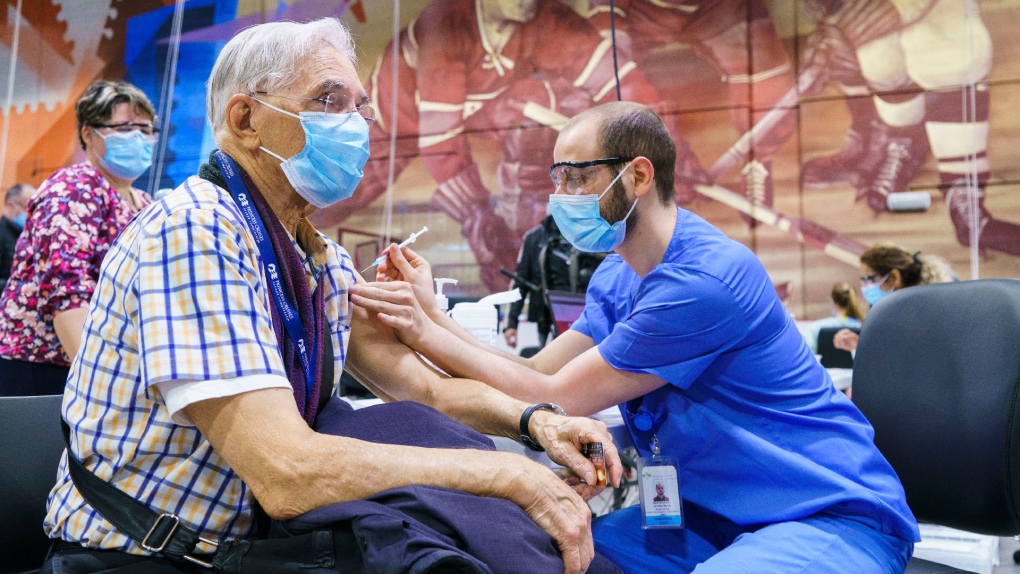 A senior citizen receives a first dose of COVID-19 vaccine at a vaccination clinic in a hockey arena in Montreal, on Wednesday, March 10, 2021. THE CANADIAN PRESS/Paul Chiasson

MONTREAL -- As North America has entered a third wave of COVID-19 with a fourth wave on the horizon, health officials now openly admit they are scared of the more infectious and deadly variants.

Dr. Rochelle Walensky, director of the US Centers for Disease Control and Prevention, recently said she had a feeling of "impending doom" about the pandemic. The situation in Quebec is equally disturbing; variants currently account for almost half of all infections and rising fast, and the majority of school and daycare outbreaks are caused by variants.

Although the recent decision to resume in-school learning for all high school youths, reopen gyms, increase the number of people in houses of worship to 250 may have been greeted with praise in some circles, not everyone shares this enthusiasm.

As usual, the worn-out mental health mantra is being brandished to justify the lifting of restrictions, as health minister Christian Dubé said, "We want people to be happy".

Maybe Dubé should consider handing out free beer instead, as the decision to lift restrictions has drawn strong criticism from many sectors of Quebec society. Buckling to public pressure for political gain may have backfired this time as not everyone is on board with the government's decision.

Infectious disease specialists consider the relaxing of restrictions completely wrong in the context of increasingly infectious and dangerous variants; high school children are terrified of going back to schools and have expressed their concerns to Premier Francois Legault about their fears of infecting their parents; houses of worship are wary of the new 250 people guideline, some deciding to go above and beyond those rules, imposing stricter measures in their establishments; the EMSB and Sir Wilfrid Laurier school boards are openly defying the return to school decree imposed on all high school student out of safety concern and both Quebec Order of doctors and Order of nurses publicly cautioned the government about relaxing restrictions.

Perhaps most telling is that even the government's own Institute of Quebec Public Health recently stated that the current restrictions are not enough to stop the spread of variants. Legault and his public health advisors do not seem to be listening to their own experts — Dr. Arruda, Dr. Drouin, where are you?

The first wave caught Quebec by surprise and ill-equipped and ill-prepared CHSLDs were unable to protect their residents causing thousands of unnecessary deaths among our elderly and most vulnerable.

By contrast, the second wave was totally avoidable if Quebec had adopted the same short-term, hardball approach that was used in New Zealand and succeeded in virtually eradicating the virus. As a result, thousands of more deaths occurred because government authorities did not heed the warnings of scientists and doctors.

Now, at the onset of a third wave driven by variants, the decision to lift major restrictions is yet another foolish repetition of previous mistakes.

For example, why have a curfew if the variants are spreading through the schools?

In addition, there is a massive gap in our defenses. There is currently no plan to vaccinate children, which means we will expect to see continuing transmission in schools and to the community with increased hospitalizations and serious illness especially among young people. Our federal government must take immediate action to study, approve and vaccinate younger adolescents and children as soon as feasible.

There will be more pandemics, more public health emergencies. At some point, an independent inquiry must be held on how the pandemic was handled in Quebec, what went wrong, and how could we have responded better.

There is one saving grace to all of this: Quebec's response should serve for many years to come as a learning example for all those who will study public health and epidemiology on how not to handle a pandemic.