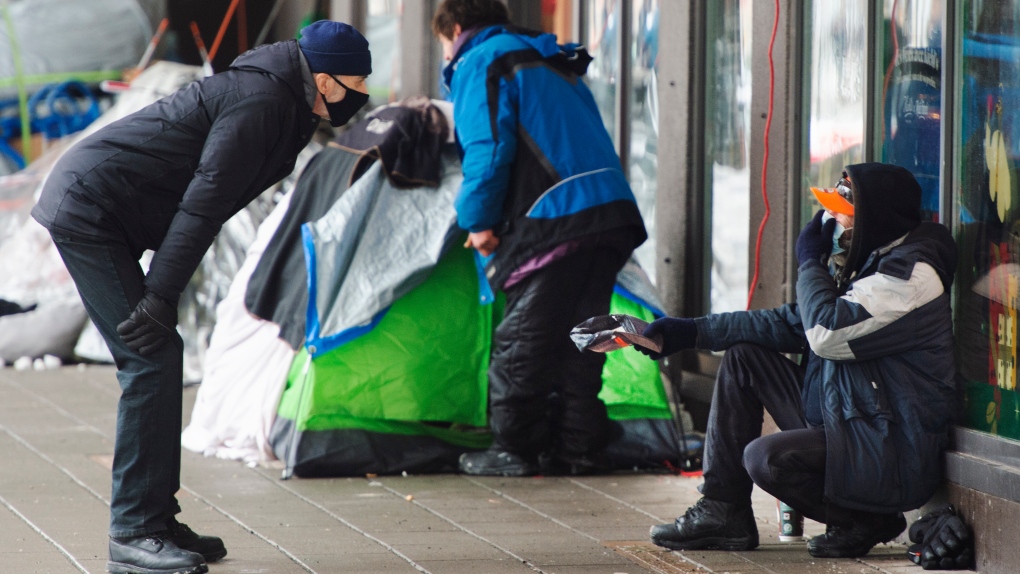 A man chats with a homeless person at a small tent city on St. Catherine street, Wednesday, January 27, 2021 in downtownMontreal.THE CANADIAN PRESS/Ryan Remior

MONTREAL -- With less than a week to go before the vote in the federal election, we're seeing a real see-saw battle, and people struggling to afford housing could be the ones to tip the vote.

1.7 million Canadian households live in what is called "core housing need" – housing that is unaffordable, overcrowded or in need of major repairs.

Canadian housing organizations, including the Old Brewery Mission in Montreal, are mobilizing these voters to Vote Housing by signing a petition.

THREAD: Today we launch the largest non-partisan housing advocacy campaign in Canadian history to mobilize 1000s of Canadians to pledge to #VoteHousing this federal election: https://t.co/7TLvQy3bqO /1

They are also reaching out to the 36 per cent of Canadians who have been homeless or know someone who has.

The goal of this national movement is to ensure political parties that take housing seriously get more votes than those that treat it like any other election issue.

Why make housing and housing affordability the defining issue of the federal campaign?

The reason is simple: to prevent Canadian cities like Vancouver, Toronto or Montreal from becoming like Los Angeles, Seattle or San Francisco, where homelessness is out of control.

The civic tensions, distress and enormous government costs faced by these cities must be avoided by all means in Canada.

Seattle, with a population roughly similar to that of Montreal, has three times more homeless people on any given evening (almost 12,000 people versus about 4,000 in Montreal).

The trend in Montreal – as in many other cities across the country – is not encouraging, however.

The number of homeless people began to increase in Montreal before COVID-19. The pandemic has only made things worse.

Montreal Mayor Valérie Plante has suggested that the number of homeless people may have doubled in the past 18 months. Beds in the city's emergency facilities are unusually full even at the beginning of the month.

As of this writing, overflow units are also filled to capacity.

The homeless numbers are rising largely because of one factor: the growing gap between incomes and rents.

For example, a person on social assistance in Quebec will receive an average of $700 per month, while average rents in Montreal for a one-bedroom or small studio apartment start at that same level, and these prices are higher in many parts of the city.

There are simply no vacancies in the city for people with very low incomes.

The only way to close this gap is through immediate and long-term public investment.

Here are concrete actions to ensure more Canadians don’t end up on the street:

If the next government fails to make these minimal commitments, we can predict with certainty that Montreal, Halifax, Edmonton and Ottawa will see their streets and public parks increasingly filled with homeless people who simply cannot find affordable housing.

We will inevitably experience the conflicts and inequalities that plague the American west coast. Canadian governments will have to spend money on shelters and policing to manage homelessness instead of investing now in affordable housing to prevent it.

On September 20, we must all vote housing.