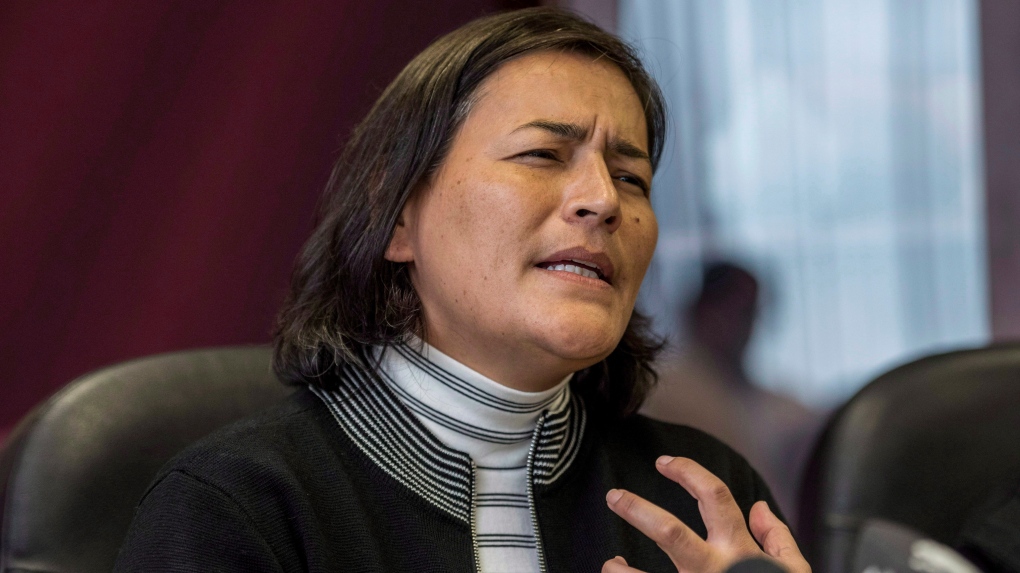 MONTREAL -- Michele Audette feels disappointed when she looks online and sees a barrage of violent threats towards Indigenous women.

"It made me so mad that we tolerate this. There's no real ... reprimand," says Audette, who was one of the commissioners for the national inquiry into missing and murdered Indigenous women and girls.

As she gently places her eight-month-old grandchild into her vehicle in Quebec City, Audette explains that she understood it would take time for governments and society to work towards the more than 200 recommendations included in the inquiry's final report last June. The report called violence against First Nations, Metis and Inuit women and girls a form of genocide.

Audette had hoped the work would mean a better and safer future for children such as her granddaughter.

She wonders if Indigenous women feel any safer, especially with threats levelled during recent anti-pipeline protests, rail blockades and demonstrations.

In many of those cases, she feels that women are more often targets than men.

"Here again, status quo. We are not safe," she says.

Bardish Chagger, Canada's minister of diversity, inclusion and youth, has called racist taunts and threats directed at Indigenous people following recent protests horrible and ignorant. He says many Canadians are unaware of Indigenous history and rights.

Erica Violet Lee, a community organizer from Saskatoon, says the treatment of Indigenous people in Canada has always been violent.

When they speak out about issues, "Canadian politeness" crumbles away, she says. It was similar during the Idle No More protest movement, which was started by four women in 2012.

"When Indigenous communities and nations exercise our inherent right to self-determination, we become troublemakers, 'bad Indians,' who don't respect the Canadian rule of law," Lee said in an email.

"But Cree laws and the laws of our lands say that we have a responsibility to act in situations of injustice and environmental devastation."

Lee recently attended a demonstration at a Saskatoon rail line in support of Wet'suwet'en hereditary chiefs opposed to a natural gas pipeline on traditional territory in British Columbia. She says some men began yelling at young protesters to jump in front of the trains.

She says she and the youth were called everything from "stupid" to "terrorists." They also received death threats.

"How do we respond to that? We keep living," Lee says.

During the pipeline protests, it was common to see online comments encouraging drivers to run over protesters. One photo showed blood on the front of a train with a laughing face emoji.

The SooToday news website in Sault Ste. Marie, Ont., citing a rise in racism, closed its comment section on Indigenous stories in February.

"We have read your ignorant ramblings, your subtle, but hurtful racism," editor Mike Purvis wrote in an editorial. "We have moderated your thinly (and not-so-thinly) veiled threats of violence."

Uttering threats is a criminal act. RCMP spokeswoman Catherine Fortin said in an email that a "hate-motivated incident," such as name-calling or racial insults, may not reach the threshold of a criminal offence, but can still be reported to police.

Nickita Longman, a Saulteaux woman from George Gordon First Nation in Saskatchewan, says it has been inspiring to see Indigenous people across the country come together in protests, but it has come with alarming backlash.

The longtime activist and organizer, who lives in Winnipeg, says the most concerning aspect of online hate and threats towards Indigenous women is how often it goes unchallenged.

The cross-Canada demonstrations have for the most part been peaceful, she says, and women will not be swayed by threats.

"Until our inherent rights are recognized and respected to the fullest capacity, we will continue to resist," Longman says.

"It is important to continue because our resistance has the capacity to dictate the future for generations to come."

"The more these comments find space on the internet, the more they embolden people to act on them in person.

"As an Indigenous woman, that is by far the scariest part."

This report by The Canadian Press was first published March 8, 2020