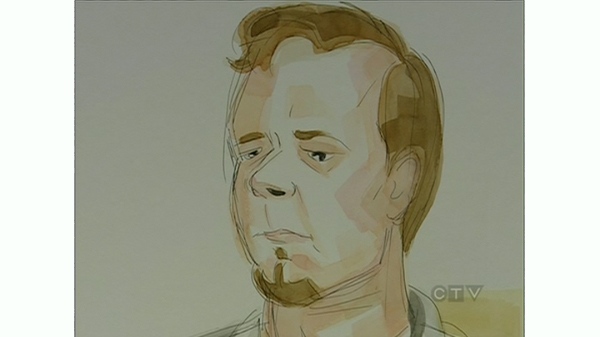 A courtroom sketch of Nicolas Stone, by Mike McLaughlin (August 4, 2010)

Nicolas Stone, a cyber predator who lured 55 teen girls into various acts of sex and pornography, was sentenced to 10 years behind bars Wednesday at a Longueuil courthouse.

But, with time already served, he could be free in a few years.

The 34-year-old Cartierville resident and father of three, who posed as a teen, used the Internet to target girls aged 12-17.

Stone encouraged the girls to remove their clothes in front of their webcam, and convinced some of them to meet him in person and engage in sex acts.

Judge Ellen Pare said there was no apparent precedent in Canada for a case with so many victims.

Prosecuting attorney Marie-Josee Guillemette, who spoke in French, supported the judge's ruling, though she had pushed for a 14-year sentence.

"Sex crimes against minors must be severely punished," she said.

But defense lawyer Robert Lahaye had argued for a shorter jail term of four to six years.

He reasoned that Stone admitted his deviancy and would be undergoing therapy.

He also said Stone's wife and kids have supported him by visiting him in prison.

Stone was caught when an undercover police officer posed as a potential victim.

He was arrested in April 2008 and has been in behind bars ever since.