Not just Price is right: Canadiens have Penguins on brink 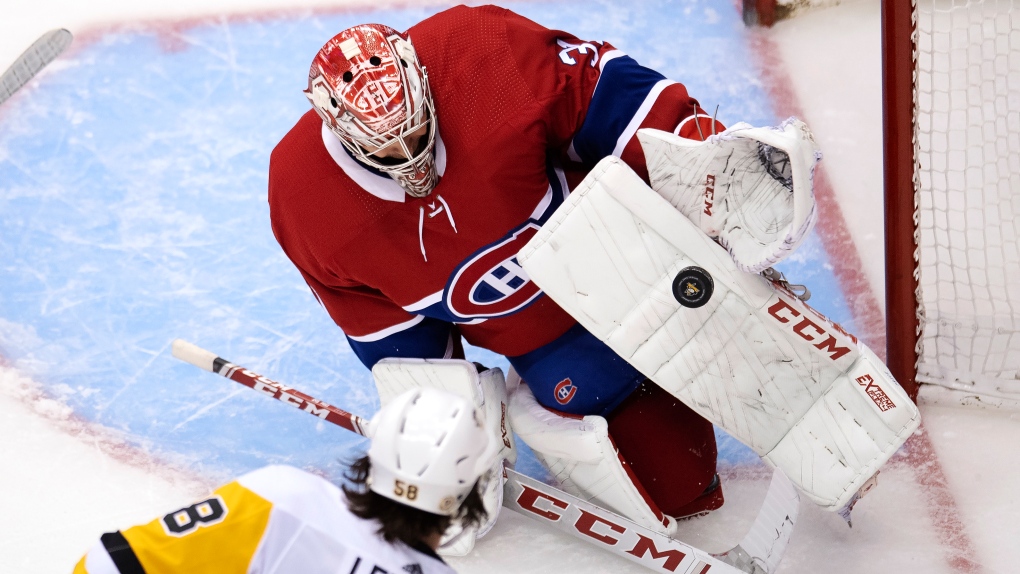 MONTREAL -- It seemed like any hope the Montreal Canadiens had of beating the Pittsburgh Penguins rested on the shoulders of goaltender Carey Price.

Price has shouldered a big load in net, but he's not the only reason the high-powered Penguins are on the brink of elimination, down 2-1 in the best-of-five qualifying round series. Montreal has held star Russian centre Evgeni Malkin to zero even-strength points with one power-play assist through three games and can knock out Pittsburgh with one more victory in Game 4 Friday.

"Pricey's been really solid: He's making some key saves for us," centre Phillip Danault said. "But yeah, he's not alone in this and it's important for him to know. We show some character, we go toe to toe. We embrace the challenge."

The Eastern Conference's 12th (and lowest) seed has shut down the NHL's best team that didn't get the luxury of a bye into the traditional first round of the playoffs. Beyond Price's 104 saves on 111 shots to match the lofty expectations for his game, the Canadiens have held the Penguins to three power-play goals in 15 chances and bottled up an opponent that won the Stanley Cup twice in the previous four seasons.

Two-time playoff MVP Sidney Crosby has scored twice and added an assist, though Jake Guentzel and Bryan Rust are also tied with him for the most points on the Penguins with three. The team defence in front of Price has been suffocating and explains why the Canadiens are a win away from advancing.

"We're definitely aware when Malkin's on the ice or Crosby's on the ice and we try and limit their chances and take their space away as quick as possible," Montreal defenceman Ben Chiarot said. "But they're world-class players and they're going to get their opportunities, and that's when Carey steps in and does what he's been doing for us. It's five of us out there working together, playing defence and we're just trying to keep it as tight as possible when those guys are on the ice."

All eyes are on the goalies as the New York Islanders face the Florida Panthers and the Nashville Predators face the Arizona Coyotes on Friday.

The Islanders made $10 million Florida goaltender Sergei Bobrovsky look vulnerable in going up 2-0, and the Panthers made some lineup and strategy adjustments to fight to see another day. New York might be able to close it out if they can crack Bobrovsky once again in Game 4 (noon EDT, NBCSN).

"A focus for us offensively for sure is trying to create some chaos, take away his eyes," Islanders forward Brock Nelson said. "You have to find ways to kind of create some confusion in front with defenders, guys crossing in front and different things."

Three-time Cup-winning coach Joel Quenneville got rewarded for not pulling the plug on "Bob" after allowing six goals in the first two games of the series and hopes vintage Bobrovsky is here to stay.

"He did what he had to do to give us a chance and got us a win," Quenneville said. "He's been under some situations where he's played in a lot of big moments like that, and I think that can help us moving forward."

Arizona goaltender Darcy Kuemper hasn't been in a lot of of big moments like this. It's just his second playoff series as the starter and the first since 2014, but that didn't stop him from making 39 saves Wednesday to push Nashville to the brink.

"The next game is going to be the most important pressure game again for Kuemps," coach Rick Tocchet said. "He's had to do this for us a lot in the last two years, and to me it's his attitude and the way he approaches the game, for me -- unflappable."

Goaltending and team defence haven't been the story in the Western Conference's 5 vs. 12 series that has the Edmonton Oilers one loss away from elimination by Chicago. The three goalies who have seen action have allowed 26 goals on 185 shots.

Edmonton coach Dave Tippett said his team has to focus on getting better for Game 4 but doesn't think it's as big a focus as cutting down on penalties.

"It's not as if we're giving up a ton of chances," Tippett said. "They're going in our net, and we have to find a way to overcome some of those mistakes that are allowing that and find a way to keep them off the board and get us more."

The Minnesota Wild don't have much time to regroup facing elimination in Game 4 (10:45 p.m., NBCSN) after being shut out 3-0 by Jacob Markstrom and the Vancouver Canucks on Thursday afternoon. Markstrom stopped all 27 shots he faced, though his teammates also blocked 22.

"They did a good job with blocking shots," Minnesota's Kevin Fiala said. "They were staying in the (shooting) lane. I feel like they blocked a lot of shots from everybody. Just have to make sure to get those through and get some rebounds and stuff."

The Columbus Blue Jackets became the first team in these playoffs to make an in-game goalie switch work, and they came back from a three-goal deficit to beat the Toronto Maple Leafs 4-3 in OT on Thursday night. The Blue Jackets can eliminate the Maple Leafs on Friday (8 p.m., NHL Network).