'No listening, no talking': Gym owners accuse Quebec of ignoring them 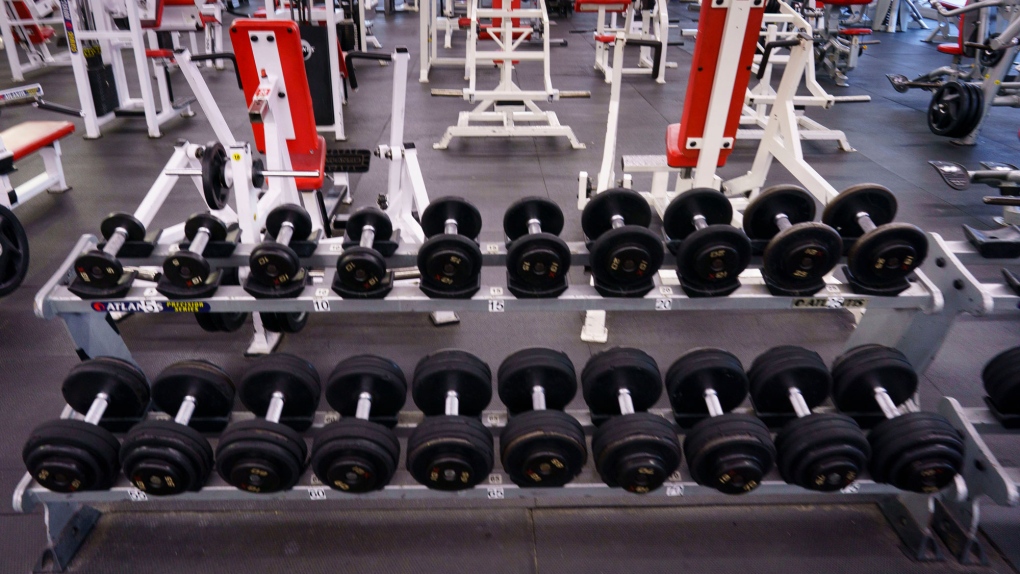 An empty gym is seen in Montreal, on Monday, October 26, 2020. Some Quebec gym, yoga, dance and martial arts business owners say they intend to reopen their doors on Thursday in defiance of provincial health rules. THE CANADIAN PRESS/Paul Chiasson

An association representing gym owners is accusing the Quebec government of ignoring them as it tries to establish a dialogue to find a way to safely open fitness centres.

"It's not just that the answers aren't satisfactory," said Gabriel Hardy, Quebec spokesperson for the Fitness Industry Council of Canada (FIC). "It's really: no answers, no listening, no talking."

Hardy said that he met with the government in November 2020 and discussed the future of the industry in pandemic times and possible solutions: "We could see that we would not get through the pandemic easily. We had made proposals in that direction. We had many avenues to help the industry get through it. None of these proposals were recognized."

The spokesperson, who is also the owner of Le Chalet gym in Quebec City, said the government has been ignoring the issue ever since, "despite the fact that we have sent letters, that we have communicated regularly, not only with public health, but with the Ministry of the Economy, the Ministry of Labour, and the sub-ministry of Sport."

The lack of openness is said to be such that the Canadian Federation of Independent Business (CFIB) has decided to intervene by sending a letter to Health Minister Christian Dubé to get the government's attention. The email communication sent Tuesday has yet to receive a response, according to Francis Bérubé, CFIB's senior policy analyst.

The fitness industry's questions are "legitimate," said Bérubé. He points out that industry representatives have put forward "innovative" proposals that would not have been answered. "Given the lack of feedback we are receiving at this time, it was deemed appropriate to issue a joint letter."

Bérubé notes that fitness centers are in a "bind." The tourism sector, also shaken by the pandemic, can exchange with the Ministry of Tourism, the analyst said.

The Ministry of Health did not respond to a request for comment from The Canadian Press on Friday.

Until then, gym owners are stretched thin while they have been closed for 14 of the last 22 months, Hardy said. Owners have accumulated an average of $75,000 to $80,000 in debt, according to an internal survey.

By working with the fitness industry, Hardy believes a satisfactory compromise can be found to limit the spread of the virus and allow reopening.

He points to British Columbia as an example, where fitness centres have been open since Jan. 20. Working with industry, the government has set strict conditions to allow them to reopen. Vaccination passports are required, and masks must be worn by customers and staff when moving locations. A distance of seven metres between clients is also required.

British Columbia's Chief Medical Officer of Health, Bonnie Henry, thanked the provincial chapter of the FIP when she announced the reopening of the gyms. These steps have allowed us to reopen with measures that "public health knows and accepts," said Hardy.

Reopening gyms is not so simple for the government, however, says Roxane Borgès Da Silva, a professor at the Université of Montréal's School of Public Health (ESPUM). "With a more contagious variant, we can expect that there will be a much higher risk of outbreaks in a gym," she said.

While it may seem contradictory to reopen restaurants before gyms, the decision can be justified, she said.

"The contamination is by aerosol. When you're working out, you're out of breath and you're expelling a lot more aerosol than when you're sitting in a restaurant."

Hardy believes that public health experts would be able to see that fitness centres are healthy environments if they came to visit the facilities.

"Have you come to visit our environments to look at what you see as dangerous? Where are the massive outbreak statistics in gyms compared to movie theatres or entertainment venues? There's no exchange, we don't know what they're basing it on, but, for that, it takes a dialogue," Hardy said.

Two people were dead after a shooting at a Texas elementary school on Tuesday, and more than two dozen children were injured, hospital officials said. Police have said the suspected shooter is in custody.