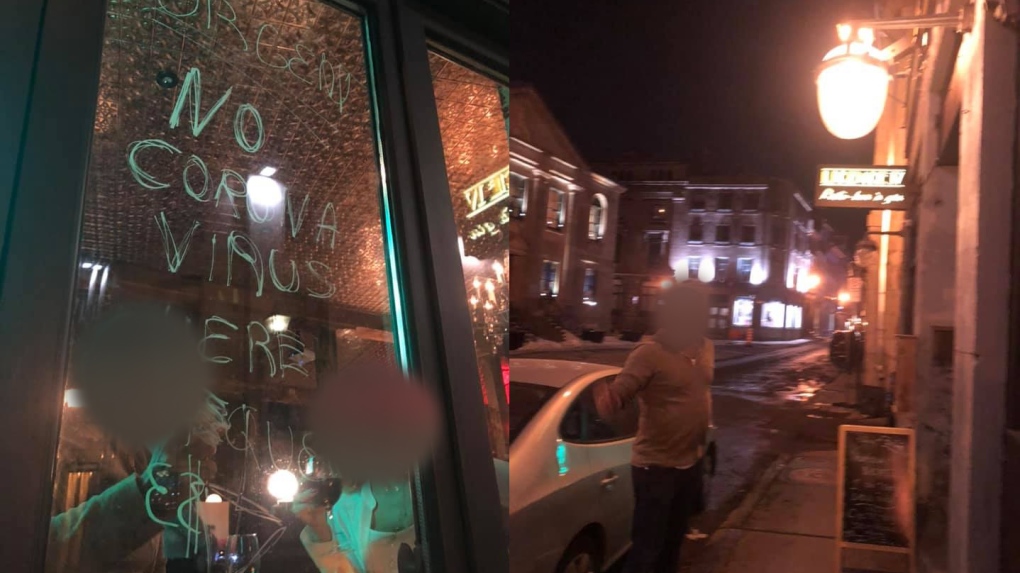 A Montreal restaurant has apologized for a bad coronavirus joke after being confronted by a passerby. (Credit: Tiffany Sung).

MONTREAL -- Tiffany Sung says she was walking with a friend in Old Montreal for dinner last Friday when a message on a restaurant window caught her eye.

It was written: "No coronavirus here."

Sung, who is visiting from Vancouver, claims a man and woman started knocking repeatedly on the window, pointing at her and making gestures.

"My hairs immediately stood up and adrenaline started pumping. I mouthed 'wtf' ... why they would write something like that on their windows?" she said.

The incident quickly devolved when the restaurant's owner came outside to speak to her.

"To be honest, it was a blur after I saw a big guy coming towards me with threatening body language," Sung said. "I told him loud and clear that the writing is totally inappropriate and he was being racist by singling me out."

She says a woman then came out and threatened to call the police.

"I walked away at that point because I felt like things would've escalated more and my friend and I could potentially be in danger," Sung said.

The owner of Licence IV has since apologized for how the incident played out.

"We wanted to tell people, come inside and enjoy. It was a bad joke," admits Ludovic Marionnet. "Lots of people passed by and laughed. This lady passed and took the joke badly and started yelling at us through the window."

He insists the message, which was generally well-received, was not meant to come off racist. Rather, it was supposed to be a tongue-in-cheek way of inviting people into the restaurant.

He tells CTV News the reason he went outside to speak to Sung was to try to calm the situation, but she acted aggressively towards him and stomped off.

Marionnet, who notes he's an immigrant himself, says he has reached out to Sung several times to apologize, but she has yet to respond.

"What else can we do?" he asked, adding the situation has been blown completely out of proportion. "We are really sorry about what happened. It will never happen again."

BACKLASH FROM THE COMMUNITY

Several members of Montreal's Asian community tell CTV News they have reached out to the restaurant to demand an explanation.

"We are not racist, dear. There has been a mega miscommunication last night and we sincerely apologize if anyone felt threatened in any way. Not our intention at all," one message from the restaurant stated. "Now, if random people want to victimize themselves, what more can we do? We have come clean and apologized. WHAT MORE DO YOU WANT FROM US?"

To another complainant, the restaurant wrote: "The concerned 'victim' just happened to see it, didn't like it and sent an f--- you finger to the couple sitting inside near the window. The writings were foolish and unclassy, yes, but totally harmless and neutral."

The restaurant purports it was hosting a private party that night and a "drunk client" wrote the message on the windows.

"Were you there that night? How can you be so sure that it was the owner who wrote it? Nah, MISCOMMUNICATION HERE. We had a party and a drunk client wrote it."

Sung insists the joke, whether simply ignorantly blind or racist in intent, targets the Asian community and encourages people to make light of the deadly virus, which has claimed more than 3,800 lives worldwide.

"Logically, I know it's not my fault, but I feel angry and sad about being forced to reflect and replay the situation in my head now and wonder whether I could've done things differently," she said.

How to avoid falling for coronavirus scams

Two members of U.S. Congress isolating themselves after contact with COVID-19 case

Gas prices in 'freefall' due to coronavirus epidemic

Behind the scenes, scientists prep for coronavirus vaccine test