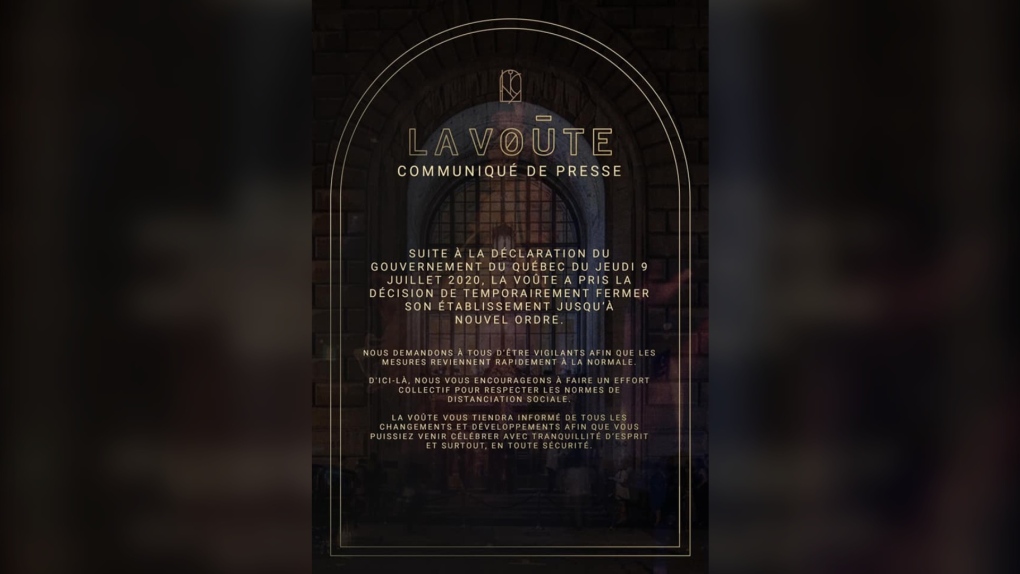 MONTREAL -- A nightclub in Old Montreal says a recent customer has tested positive for COVID-19 and is urging others who may have been at the club at the same time to get tested.

In a statement on its Facebook page (see below), management of La Voûte on St. Jacques St. said it "deeply regrets to announce that despite all the health measures implemented by our establishment to ensure the well-being of our customers, we have received confirmation that a customer who attended La Voûte Saturday, July 4th has tested positive for Covid-19."

The note adds that "this person started experiencing characteristic symptoms of the virus on July 5th and was declared positive on July 8th," adding that there is no evidence to suggest the person contracted the virus while at the club.

"Although we have not been contacted by Quebec Public Health, it is our civic responsibility to inform you."

The club's statement said the customer in question wore a mask provided by the club and said they followed other recommended public health guidelines.

It is asking customers and staff who were at the club the same night as the infected client to get tested as soon as possible.

In a subsequent post, the club announced that it is closing temporarily in light of new measures for bars announced Thursday by the Quebec government.

Earlier this week, Annie's, a popular bar in Ste-Anne-de-Bellevue, asked its customers to get tested after an employee tested positive for COVID-19.