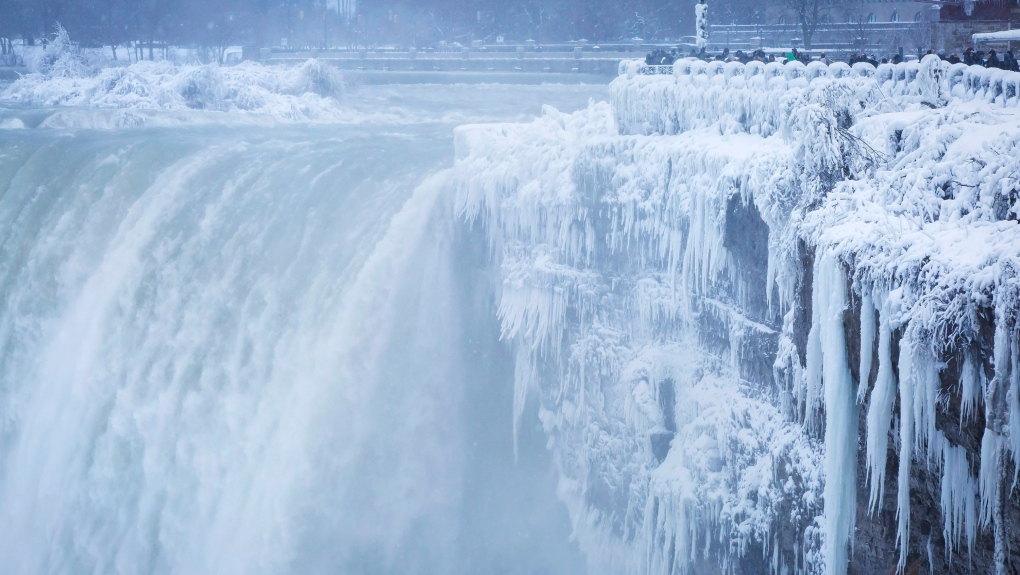 Visitors take photographs at the brink of the Horseshoe Falls in Niagara Falls, Ont., as cold weather continues through much of the province, Tuesday, January 2, 2018. (THE CANADIAN PRESS/Aaron Lynett)

MONTREAL -- First it was the CN Tower. Now, another one of Canada's most iconic spots is getting lit up for the bleu-blanc-rouge.

On Saturday, Niagara Parks took to Twitter to announce that in celebration of the Montreal Canadiens' surprising playoff run, the famed Horseshow Falls will be lit illuminated in the team's colours.

In support of the @CanadiensMTL's pursuit of the Stanley Cup, as Canada’s last remaining team in the 2021 @NHL playoffs, the Canadian Horseshoe Falls will be illuminated tonight in Red, White and Blue from 9:30 to 10:00pm., the night before the team begins its next series. pic.twitter.com/BzwmRgbCoc

The Canadiens, who scraped into the playoffs and came back from a 3-1 deficit to the Toronto Maple Leafs in the first round and then swept the Winnipeg Jets in the second, will take on the Las Vegas Golden Knights in the third round.

Game one is on Monday night.

Last week, despite the Habs disappointing Toronto fans, the CN Tower was lit up blue, white and red as a sign of support for the sole Canadian team left in the playoffs. Toronto Mayor John Tory lived up to his end of a bet with Montreal Mayor Valerie Plante by raising a Canadiens flag above city hall.