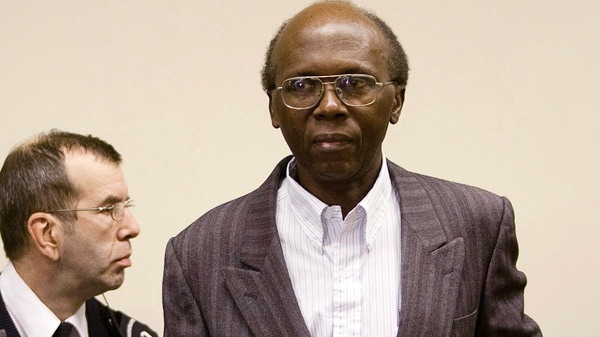 Leon Mugesera, accused of helping incite the Rwandan genocide, arrives for his immigration hearing to seek a judicial review and a delay of his expulsion from Canada, Monday, January 16, 2012 in Montreal. Mugesera lost a two-decade battle to stay in Canada and is now set to be deported.

While there were tears at Pierre Elliot Trudeau Airport from Mugesera's relatives, there were expressions of joy in Rwanda that he will finally be tried for a speech he gave in 1992, allegedly inciting mass killings two years later.

"Leon Mugesera's deportation, while decades past due, is welcome news for a people committed to healing and justice," Rwanda's Foreign Minister Louise Mushikiwabo said in a Tweet. "Canada did the right thing."

Mugesera's lawyers had asked the court to hold off on his deportation until the United Nations could investigate claims that he would face torture if returned to his homeland.

However, Delorme decided Monday the decision was not within his jurisdiction.

Mugesera, 59, was due to be deported last week, when his lawyers made a last minute bid to keep him in the country by appealing to the United Nations Committee Against Torture.

The UN committee then requested that Canada hold off on making a decision until it could examine the allegations, a process that would have likely have taken a few months.

That prompted the provincial court to stay the deportation order while the legal implications of the UN request could be assessed.

Federal lawyers argued on Friday, however, that the provincial court didn't have the jurisdiction to rule on immigration cases—a stance that Delorme ultimately agreed with on Monday, saying such decisions were in the realm of the federal court.

"It seems as though he may have run out of options after 16 years of fighting to stay here in Canada," CTV Montreal's Camille Ross told CTV News Channel.

However, Ross said lawyers from both sides were in a conference call with a federal court judge in Ottawa on Monday afternoon, with Mugesera's defense team fighting for a last-minute order to stay the deportation.

The federal court ruled in favour of the deportation.