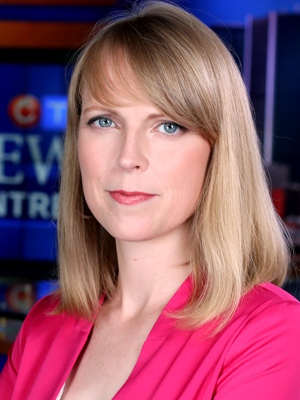 Angela MacKenzie joined CTV Montreal in July 2015 after completing a graduate degree in journalism at Concordia University. She started out as a researcher at the news desk and soon after she began reporting on air.

She was born in Ottawa but grew up on Cape Breton Island and in Kingston, Ontario. She did a BFA in Film and Video at York University in Toronto. In 2004 she made the move to Montreal, eventually working in communications and freelance writing. She then got a little sidetracked and spent three years turning a hobby into a business producing her own line of skincare products.

The demands of running a company made her eager to return to writing so in 2012 she started a web project called Illa Fabulis. Angela produced long-form interviews and a podcast with creative Canadian women. The experience inspired her to return to school for journalism and reignited her love for visual media. When she graduated she was chosen to do a six-week internship with CBC’s foreign bureau in London, UK. It was an incredible experience for her to work closely with correspondents while they reported from Russia, Ukraine, Turkey, South Africa and Nigeria. When she returned to Canada she worked as a researcher for the Wall Street Journal for their coverage of the shooting on Parliament Hill.

For Angela it’s a dream come true to work in her beloved Montreal with such a dynamic and successful team of journalists at CTV News. She loves being out in her community, meeting interesting people and sharing their compelling stories.

In her free time she likes to take in Montreal’s vibrant music scene, grows as many vegetables as she can cram into her community garden plot, goes running on Mount Royal, and escapes whenever she can to the country for some starry nights and fresh air.