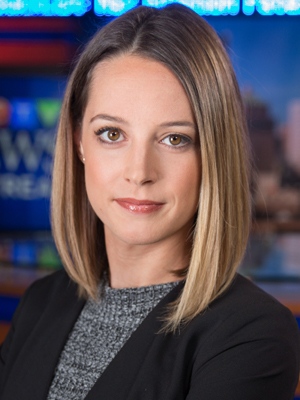 Amanda joined CTV Montreal as a freelance reporter in 2016.

She’s been on the frontlines of some of the biggest stories in the province, such as the march against climate change that drew hundreds of thousands of people to Montreal, the amber alert triggered by accused double-murder suspect Ugo Fredette (prompting a province-wide manhunt) and the spring floods in both 2017 and 2019.

Amanda is most passionate about covering politics, breaking news and look-back pieces, such as the story she did on the old Champlain Bridge ahead of the Samuel de Champlain Bridge's official opening.

She is part of the team at CTV Montreal that won the RTDNA award for long-term coverage of asylum seekers crossing the border irregularly via Roxham Road in 2017.

Before joining CTV, Amanda was a reporter/producer at CJAD 800, where she was part of the team that won the RTDNA for breaking news coverage of the shootings on Parliament Hill in 2015.

Prior to that, she was a breaking news producer at CTV News Channel in Toronto.

Amanda holds a BA in Communication Studies from Concordia University and a Master’s in Journalism from Ryerson University.

When she’s not working, Amanda loves to travel, cycle and go for long walks on the mountain with her pup Lucy.