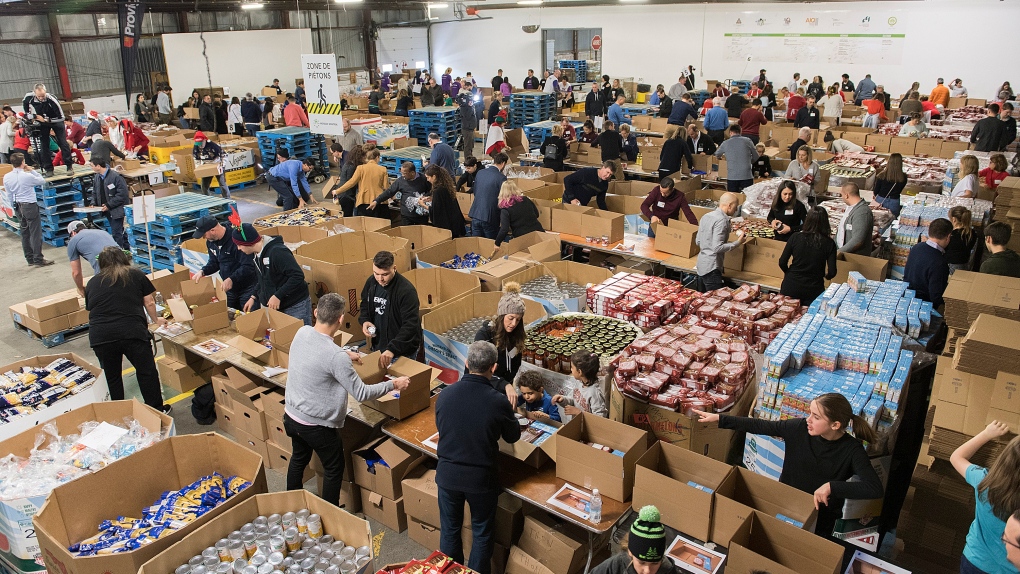 MONTREAL -- Hunger continues to gain ground in Quebec, to the point where even people with jobs sometimes need a little help to avoid going to bed hungry, according to new data released to The Canadian Press by Quebec Food Banks.

HungerCount 2021 indicates that, all services combined, the Quebec Food Banks network helped 21.6 per cent more people in 2021 than in 2019. There was a significant 37 per cent increase in the distribution of food baskets.

The number of employed people using food banks jumped by 40 per cent.

"It is very worrying to note that even people who have a job, and are active, are not able to overcome food insecurity," said Martin Munger, executive director of the Quebec Food Banks.

He recalled that in the first months of the pandemic, a 30 to 50 per cent increase in requests for food assistance was measured.

"What the latest survey tells us is that this increase continues," he said. "When we did this survey in March [2021], we found that 21.6 percent more people were using food banks, meaning that more than 600,000 Quebecers are turning to Quebec food banks each month."

Just under one third of participants in the HungerCount 2021 study -- which consolidates socio-economic data from almost all of the 1,200 member agencies of the Quebec food bank network -- explained that they turned to food banks because they could not cover certain basic expenses or because their income did not allow them to eat adequately.

Forty-three per cent of food assistance applicants are people who live alone, 40 per cent are households with children, and just under 10 per cent are seniors.

"What we're seeing is that many people don't have enough money to adequately feed themselves or their families," Munger said. "They have to make choices."

And since food is a "compressible" expense when compared to housing, for example, it will often be food that takes a hit when money is tight, he added.

While the pandemic may account for some of the increase in food bank use, the rising cost of living is also a factor. Munger also noted that Premier François Legault had asked, at the beginning of the pandemic, for the population not to hesitate to ask for help.

"We don't have precise data at this level, but we can think that it contributed to lowering the taboos because there are people who already had needs, who overcame their embarrassment, and who resorted to food banks," he said.

The organization also reported a significant decrease in the number of foodstuffs currently available and is appealing for help.

Quebec Food Banks supports and represents some 1,200 community organizations that serve more than 600,000 people each month.