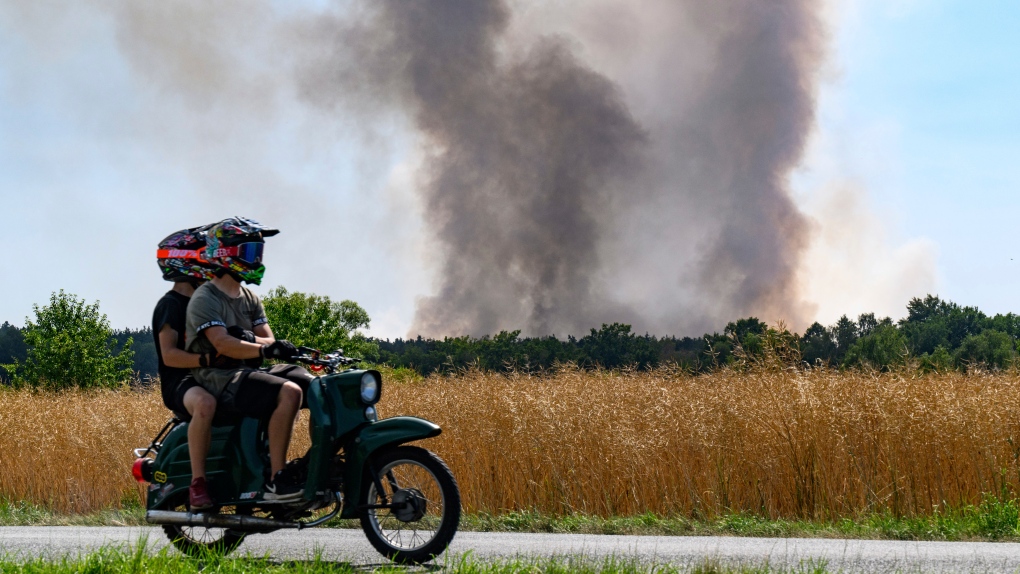 A couple on a moped look at a forest fire near Radeburg in Germany, Tuesday, July 19, 2022. The double blow of heat waves and droughts exacerbated by climate change are making wildfires more frequent, destructive and harder to fight. (Robert Michael/dpa via AP)

National governments are unprepared to adapt to the consequences of the climate crisis, according to a meta-analysis of more than 1,500 scientific papers.

While natural disasters are becoming more frequent, the analysis states that the majority of actions documented in the scientific literature have been taken at the local level, by households or individuals.

Of course, the issues vary enormously from one region to another, which does not allow for a panacea.

However, "there is still not a sufficient level of centralized leadership in terms of government policy and funding," explained Concordia University assistant professor and study co-author Alexandra Lesnikowski.

"It's something that's becoming more and more urgent," she said, noting that Canada has recently experienced "really catastrophic events" such as the heat waves, forest fires, floods, rising sea levels and the melting of permafrost.

Nevertheless, Lsenikowski remains optimistic about the direction Canada is taking.

"We have seen some parts of the country take strong action more quickly," she said.

Canada has had a Disaster Mitigation and Adaptation Fund since 2018.

In the fall, the federal government will present its first National Adaptation Strategy.

"We need much clearer policy targets on adaptation," she said. "We need to start thinking about what that means in concrete terms for different parts of the country."

By comparison, France created its first of two adaptation plans in 2011, while the United Kingdom did the same in 2013.

The United States still does not have one.

Adapting to the climate crisis involves a host of small details to consider when it comes to urban planning, said Lesnikowski.

Take heat waves, for example. While it's important to "make sure our health care system can handle it," she said many other steps should be taken.

It's also necessary to provide air-conditioned public spaces, to plant trees in neighbourhoods that have few, and even "change the types of materials in our buildings so they absorb less heat."

Even so, adjustments like these won't always be enough, Lesnikowski warned.

In the case of floods such as those that struck Quebec in recent years, there are indeed ways to limit the damage, such as "building our homes a little differently."

But we must also determine "if there are places that are now too dangerous to live in," she said -- places where all the measures in the world will never be enough.

Moreover, according to the results of the analysis, "few studies attempt to evaluate the effectiveness of the measures" that are taken.

Not being sure whether a solution actually works could therefore cause problems in the future, Lesnikowski explained, as time is working against us.

In any case, "it's also immensely important to keep in mind that different communities will be disproportionately affected by climate change because of factors like inequity, poverty, etc.," she added.

It's still possible to adapt to impending changes, but only if air pollution is adequately reduced, Lesnikowski said.

"It's a reality we're already living with, but the severity of the risks is something we still have the power to change," she said. "The future is not set in stone."

Chances will be improved "if we can meet the targets we have set for reducing greenhouse gases," she said.

The paper, called A systematic global stocktake of evidence on human adaptation to climate change, was published in November 2021 in the Nature Climate Change Journal.

This report was first published in French by The Canadian Press on Aug. 14, 2022.

Dozens of Florida residents left their flooded and splintered homes by boat and by air on Saturday as rescuers continued to search for survivors in the wake of Hurricane Ian, while authorities in South Carolina and North Carolina began taking stock of their losses.