As Russia’s invasion of Ukraine rages on, Montrealers are preparing relief efforts for refugees who could end up in Canada, with food and clothing donations pouring into Ukranian churches around the city.

At the Assumption Of Blessed Virgin Mary Church in Rosemont, parish priest Ihor Oshchipko said the contributions have been nonstop.

“So many people want to come to donate,” he said.

He also said he’s been contacted with offers to house refugees when they arrive, and the calls haven’t come from Montreal’s Ukranian community alone.

Oshchipko himself is prepared to accept his two nieces and their four children.

The Ukranian Catholic Church of St-Michael’s is also accepting donations, with an emphasis on medical supplies.

The church sent out a call for unopened medications such as painkillers, bandages, syringes, disinfectant, IV lines, decompression needles, etc, as well as clothing. 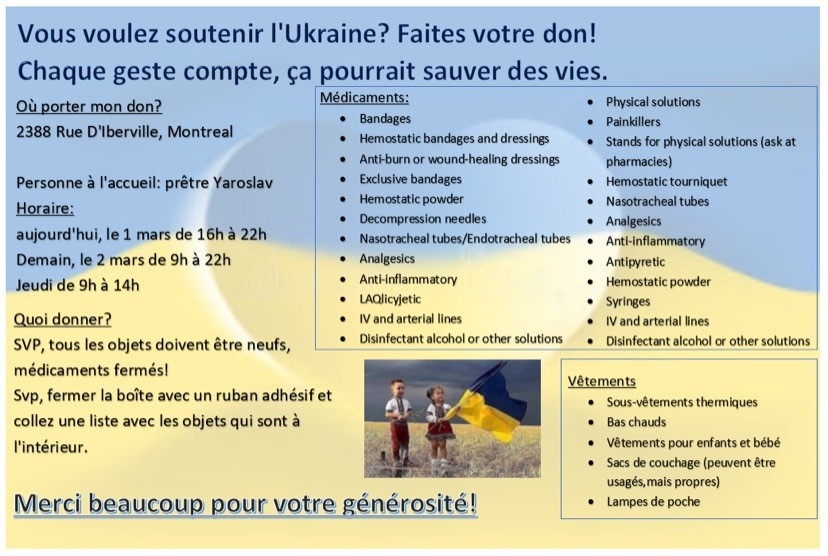 "You’re going to see probably that people will stay close to the border area," Rema Jamous told The Canadian Press. “The overwhelming majority of refugees around the world will stay close to home and they will wait in neighbouring countries for an opportunity to return to their countries of origin.”

The federal government announced it is prioritizing residency applications from Ukraine and is extending a extending a temporary public policy allowing Ukranian visitors to apply for a work permit from within Canada.

The president of the St. Volodymyr Ukranian Cultural Association says that while many Ukrainians are staying put and will need support, many will also be relocated to other countries.

“There’s going to be two levels of humanitarian needs. People staying in Ukraine that will be displaced, and we’re looking at about 12 million people,” Gregory Bedik told CTV News. “The other is the people that are fleeing Ukraine.”

Are you in Ukraine? Do you have family in Ukraine? Are you or your family affected? Email MontrealDigitalNews@bellmedia.ca.

— With files from The Canadian Press.